Magnets, how do they work? Although the quantum mechanics behind ferromagnetism are by no means easy, a few simple experiments can give you a good grasp of how magnets attract and repel each other, and show how they interact with electric phenomena. [Niklas Roy] built an exhibit for the Technorama science museum in Switzerland that packs a bunch of such electromagnetic experiments in a single package, appropriately called the Visitors Magnet.

The exhibit consists of a big magnet-shaped enclosure that contains a variety of demonstrators that are all powered by magnets. They range from simple compasses to clever magnetic devices we find in the world around us: flip-dot displays for instance, on which you can toggle the pixels by passing a magnet over them. You can even visualize magnetic field lines by using magnetic viewing film, or turn varying fields into audio through a modified telephone receiver. 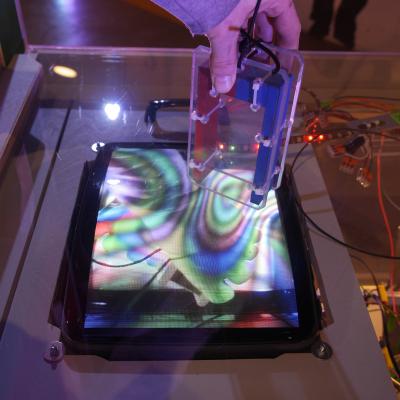 Another classic demonstrator of electromagnetism is a color CRT monitor, which here displays a video feed coming from a camera hanging directly overhead. Passing a magnet along the screen makes all kind of hypnotizing patterns and colors, amplified even more by the video feedback loop. [Niklas] also modified the picture tube with an additional coil, connected to a hand-cranked generator: this allows visitors to rotate the image on the screen by generating an AC current, neatly demonstrating the interaction between electricity and magnetism.

The Visitors Magnet is a treasure trove of big and small experiments, which might not all withstand years of use by museum guests. But that’s fine — [Niklas] designed the exhibit to be easy to maintain and repair, and expects the museum to replace worn-out experiments now and then to keep the experience fresh. He knows a thing or two about designing engaging museum exhibits, with a portfolio that includes vector image generators, graffiti robots and a huge mechanical contraption that plays musical instruments.