Nothing quite says vintage computer like a dedicated glass terminal. We enjoyed [Adam]’s restoration of an Acorn CRT monitor. The 14 inch display had a common problem: a defective power switch. Replacing a switch shouldn’t be a big deal, of course, but these old CRT monitors have exciting voltages inside and require special care.

One common issue, for example, is the fact that the old CRTs are really large capacitors and can hold a dangerous charge for some time. The easiest way to handle the potential problem is to make sure the device is unplugged, ground a screwdriver blade, and push the blade under the second anode cap. Most of the time, nothing happens. Once in a while, though, you’ll hear a loud pop and you just saved yourself a nasty shock.

Even though the actual repair was pretty mundane, the teardown was a great nostalgia trip and while we don’t want to give up our LCD, we do like the old glass. CRTs have a long history and came a long way before their last gasps. They even took a turn as mass storage devices. 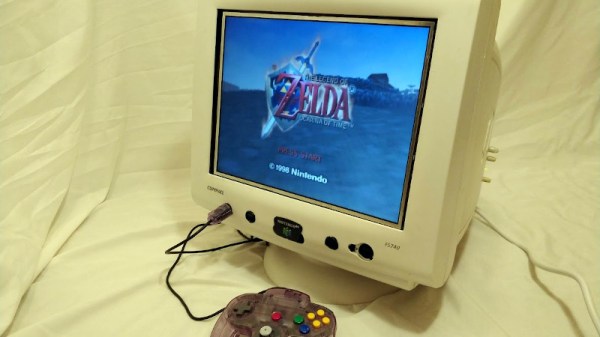 In 1997, chances are that if you didn’t have a Nintendo 64 already, you wanted one. (Never mind that the games cost the GDP of a small country.) It gave you both the supreme game designing talent of Shigeru Miyamoto and graphics that left the Sony behind. The trouble, though, was that like all consoles, the N64 required a large TV set and a load of wires. There was never a compact all-in-one version that integrated console, display, and speakers in the same package, and that was something [Mason Stooksbury] evidently considered to be a shame. A couple of decades late, he’s created the all-in-one Nintendo 64 appliance that the games giant never made in the ’90s, and we’re lucky enough to be able to take a look at it.

The starting point for the build is entirely in-period, the shell of a late-1990s Compaq CRT monitor. In the front goes a laptop display panel with a monitor conversion board, leaving plenty of space behind for a pair of full-size speakers. On top of the speakers sits a bare N64, with the controller ports brought out to the front panel below the screen. It’s not all retro though, there is also an HDMI converter and an HDMI output to drive a modern TV if desired. The N64 itself has an interesting backstory, it was his original console from back in the day that died following a lightning strike, and he brought it back to life decades later after some research revealed that the N64 PSU has a fuse.

Would an all in one ’64 have sold like hot cakes in ’97? Probably, and we’d be featuring all sorts of hacks on them today. As it is, portable N64s seem to feature most often here.