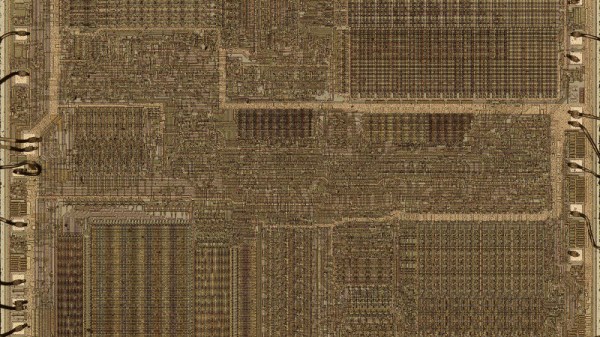 Can you remember when you received your first computer or device containing a CPU with more than one main processing core on the die? We’re guessing for many of you it was probably some time around 2005, and it’s likely that processor would have been in the Intel Core Duo family of chips. With a dual-core ESP32 now costing relative pennies it may be difficult to grasp in 2020, but there was a time when a multi-core processor was a very big deal indeed.

What if we were to tell you that there was another Intel dual-core processor back in the 1970s, and that some of you may even have owned one without ever realizing it? It’s a tale related to us by [Chris Evans], about how a team of reverse engineering enthusiasts came together to unlock the secrets of the Intel 8271.

If you’ve never heard of the 8271 you can be forgiven, for far from being part of the chip giant’s processor line it was instead a high-performance floppy disk controller that appeared in relatively few machines. An unexpected use of it came in the Acorn BBC Micro which is where [Chris] first encountered it. There’s very little documentation of its internal features, so an impressive combination of decapping and research was needed by the team before they could understand its secrets.

As you will no doubt have guessed, what they found is no general purpose application processor but a mask-programmed dual-core microcontroller optimized for data throughput and containing substantial programmable logic arrays (PLAs). It’s a relatively large chip for its day, and with 22,000 transistors it dwarfs the relatively svelte 6502 that does the BBC Micro’s heavy lifting. Some very hard work at decoding the RMO and PLAs arrives at the conclusion that the main core has some similarity to their 8048 architecture, and the dual-core design is revealed as a solution to the problem of calculating cyclic redundancy checks on the fly at disk transfer speed. There is even another chip using the same silicon in the contemporary Intel range, the 8273 synchronous data link controller simply has a different ROM. All in all the article provides a fascinating insight into this very unusual corner of 1970s microcomputer technology.

As long-time readers will know, we have an interest in chip reverse engineering.