The last time we visited the Hackaday shooting range we were all psyched up to get the right posture, breathe correctly, lower our heart rates and squeeze the trigger at exactly the right moment that the wandering cross hairs align with the target ……. and lastly accommodate the inevitable recoil. But never did we think to check the temperature of our ammo! Ok, temperatures aren’t likely to vary that much there unless the range cat chooses to lay down on top of the ammo box, but out in the wilderness the temperatures can easily vary by up to 30 degrees, which would certainly be a problem. 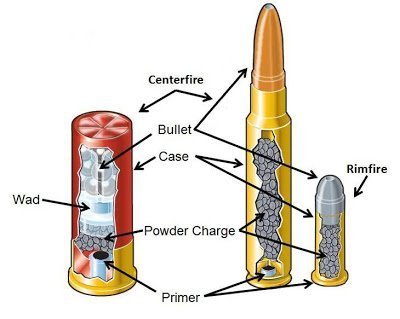 If we take a quick look at what’s happening on Johnny’s Reloading Bench  we get an in depth comparison of different powders at different temperatures, with data being collected via a bullet velocity radar. If nothing else, it’s interesting just to get a peep into the mysterious world of ‘Reloading’ where every one of the tiny kernels or ‘balls’ of powder make a difference and different powders require particular primers to make them burn properly.

Just to make it clear, bullet speed makes a big difference to the trajectory, especially at long distances. For example, if the bullet were to travel at close to the speed of light, there would be almost no trajectory at all and the shooter would not have to adjust the vertical aim for distance. Normally, we have to aim upwards to hit the target:

It may be that we ‘zero in’ our sights at room temperature, but then end up actually shooting the firearm on a cold, frosty morning with cold ammo, and given what we have now learnt from the video, we could now make a small adjustment for that eventuality, depending on the particular ammo we are using. Johnny’s video is after the break:

END_OF_DOCUMENT_TOKEN_TO_BE_REPLACED

If you’ve ever fired a potato cannon, you’ll know that they are a raucous good time, but are somewhat clumsy to reload after each shot. Seeing an opportunity to improve on the design and minimize the delay between launches, [Danger First] have concocted a fast reloading potato cannon — or should I say — Potowitzer.

The key here is that they’ve gone through the extra effort of designing and building honest-to-goodness artillery rounds for their Potowitzer’s manual breech-loading mechanism. Foregoing the inconsistency of potatoes, they’ve 3D printed a bevy of bullets and sealed them with propane gas into PVC pipe cartridges. Metal contacts around the base to carry current from a BBQ lighter to the inside of the cartridge to ignite the propellant. Seeing it fire at about 18 rounds per minute is something special.