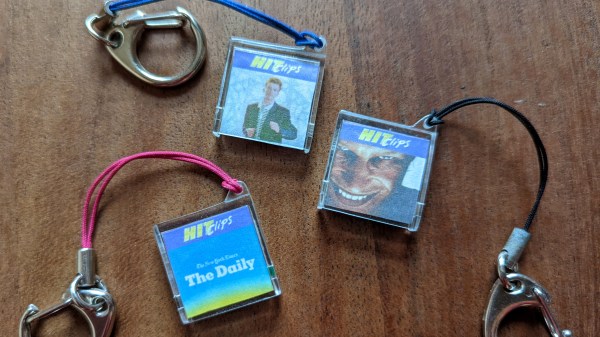 In August 2000, Tiger Electronics released HitClips: Music cartridges and players designed to easily share 60 second low quality Clips of a youngster’s favorite Hits. Various players were available, and individual cartridges were inexpensive enough to collect. And it’s these toy music players that [Guy Dupont] has been hacking quite successfully on as you can see in the video after the break and on [Guy]’s Hackaday.io page.

[Guy]’s main goal was to make cartridges of his own that could not just hold more music than the short clips in the commercially made product, but could make use of modern technology that has matured since HitClips came onto the scene more than 20 years go.

The project’s components are relatively simple, but beautifully executed. An ATTINY84 didn’t work out, so a SAM D09 controller was put it place to to read files from a microSD card and translate the WAV file into the HitClips player’s format. 3d printed cartridges and custom PCB’s complete the hack, ensuring that you can use any of the many HitClips players to play something new for a change.

The end result is quite good, considering that it’s still just 8 bit audio on a 20 year old toy player. Tiger Electronics made another toy that’s quite popular with hackers of the musical kind.

END_OF_DOCUMENT_TOKEN_TO_BE_REPLACED 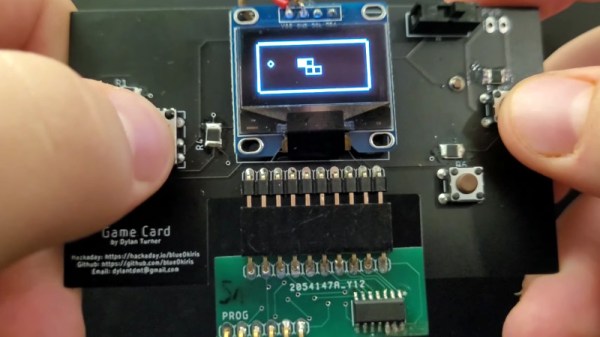 Over the years we’ve seen plenty of homebrew handheld game systems that combine an AVR microcontroller, a few buttons, and an small OLED display. Some of them have even been turned into commercial products, such as the Arduboy. They’re simple, cheap, and with the right software, a lot of fun. But being based on an MCU, most of them share the same limitation of only being able to hold a single game at any one time.

But not the Game Card, by [Dylan Turner]. This handheld was specifically designed so that games could be easily swapped out using physical cartridges. But rather than trying to get the system’s microcontroller to boot code from an external flash chip, the system relocates the MCU to the removable cartridge. That might seem a bit overkill, but given how cheap the ATTINY84A on each cartridge is, it’s not exactly going to break the bank.

With the microcontroller on the cartridge, the only hardware that stays behind on the Game Card is the SSD1306 128×64 OLED display, buttons, and the battery. That means the handheld is effectively non-functional unless a game is slotted in, but that could be said of most early cartridge-based game systems as well. On the other hand, it also opens up the possibility of producing cartridges with more powerful microcontrollers down the line.

Using a different microcontroller for each game is a neat hack, but it’s not the only solution to the problem. We previously saw a community effort to add expandable storage to the Arduboy in the form of a DIY cartridge, which ultimately led to the development of an official flash chip upgrade for the handheld.

END_OF_DOCUMENT_TOKEN_TO_BE_REPLACED 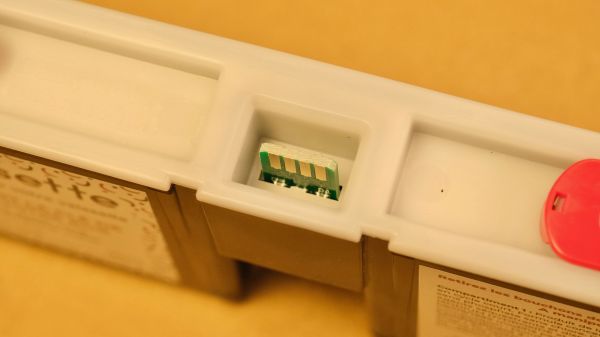 Has it really come to this? Are we really at the point that dishwashers have proprietary detergent cartridges that you’re locked into buying at inflated prices? 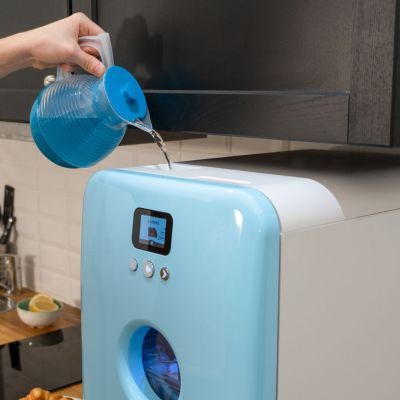 Apparently so, at least for some species of the common kitchen appliance. The particular unit in question goes by the friendly name of Bob, and is a compact, countertop unit that’s aimed at the very small kitchen market. [dekuNukem] picked one of these units up recently, and was appalled to learn that new detergent cartridges would cost an arm and a leg. So naturally, he hacked the detergent cartridges. A small PCB with an edge connector and a 256-byte EEPROM sprouts from each Bob cartridge; a little reverse engineering revealed the right bits to twiddle to reset the cartridge to its full 30-wash count, leading to a dongle to attach to the cartridge when it’s time for a reset and a refill.

With the electronics figured out, [dekuNukem] worked on the detergent refill. This seems like it was the more difficult part, aided though it was by some fairly detailed specs on the cartridge contents. A little math revealed the right concentrations to shoot for, and the ingredients in the OEM cartridges were easily — and cheaply — sourced from commercial dishwashing detergents. The cartridges can be refilled with a properly diluted solution using a syringe; the result is that each wash costs 1/75-th of what it would if he stuck with OEM cartridges.

For as much as we despise the “give away the printer, charge for the ink” model, Bob’s scheme somehow seems even worse. We’ve seen this technique used to lock people into everything from refrigerator water filters to cat litter, so we really like the way [dekuNukem] figured everything out here, and that he saw fit to share his solution. 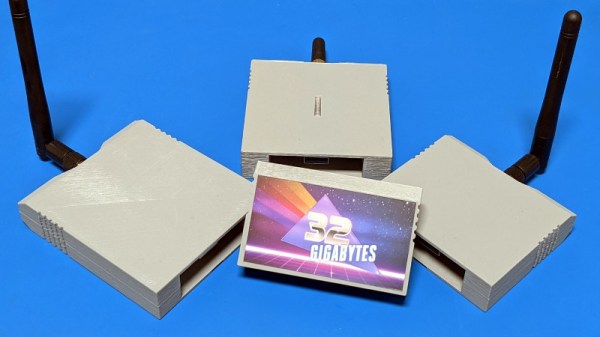 For viewers of sci-fi TV and films from the 1960s onwards, the miniaturisation of computer hardware has been something of a disappointment. Yes, it’s amazing that we can get 1.21 Jigabytes onto a memory card that fits comfortably under a postage stamp, but we were promised a different future. One of satisfyingly chunky data modules that activated everything from starships to handheld data recorders to malevolent rogue supercomputers, and one that has so far only materialised in the form of cartridges for game consoles. 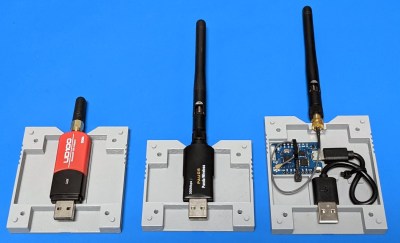 Our colleague [Tom Nardi] has the solution for his cyberdeck though, in the form of 3D-printed cartridge shells that hide regular USB hardware and mate with a concealed USB socket in the slot. So far he’s designed cartridges for Flash drives, WiFi and Bluetooth adapters, a Wemos D1 Mini, a receptacle, and a parametric reference design.

It’s a bit of pleasing retro fun, but behind it all could be a surprisingly practical and useful expansion system. Each cartridge contains enough space for a lot of extra electronics, so it’s almost the ideal format for building a USB-driven project inside. Best of all since the interface is USB, it still works with conventional USB plugs and sockets. We like the idea, and it’s one that would be a good addition to any cyberdeck project.

END_OF_DOCUMENT_TOKEN_TO_BE_REPLACED 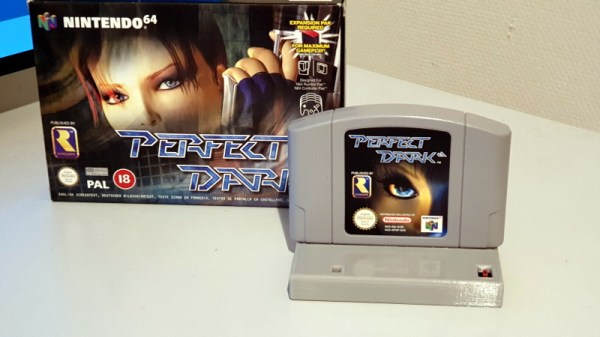 At its core, the RetroArch project exists to make it easier to play classic games on more modern hardware. The streamlined front-end with its tailored collection of emulators helps take the confusion out of getting your favorite game from decades past running on whatever gadget you please, from your smartphone to the venerable Raspberry Pi. But there’s always room for improvement.

In a recent blog post, the folks behind RetroArch took the wraps off of an exciting hardware project that’s been in the works for about a year now. Referred to simply as “RetroArch Open Hardware”, the goal is to develop a fully open source cartridge adapter that will integrate seamlessly with the RetroArch software. Just plug in your original cartridge, and the game fires right up like back in the good old days. 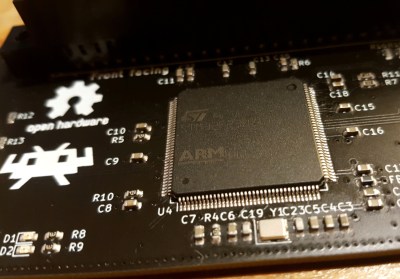 Now to be clear, this isn’t exactly a new idea. But the team at RetroArch explain that previous devices that blurred the line between hardware and emulation have been expensive, hard to find, and worst of all, proprietary. By creating an open hardware project, they hope to truly unleash this capability on the community. Instead of having to deal with one vendor, multiple companies will be free to spin up their own clones and potentially even improve the core design. Should none of the ones on the market fit your particular needs, you’d even be free to build your own version,

What’s more, the gadget will also make it easier to create your own ROMs from cartridges you own. By appearing to the operating system as a USB Mass Storage device, users can literally drag and drop a game ROM to their computer’s desktop. No arcane software fired off from the command line; as much as we might enjoy such things, it’s not exactly intuitive for the gaming community at large. The same technique will also allow users to backup their saved progress before it’s inevitably lost to the ravages of time. The device demonstrated by the team currently only works on Nintendo 64 games, but presumably compatibility with be expanded to other cartridges in the future.

Over the years, we’ve seen a number of hombrew devices designed to read and copy game cartridges. We’ve even seen some rather polished examples that were released as open hardware. But those devices never had the public backing of such a well known group in the emulation scene, and we’re excited to see what kind of development and adoption can be spurred on by this level of legitimacy.

[Thanks to Nick for the tip.] 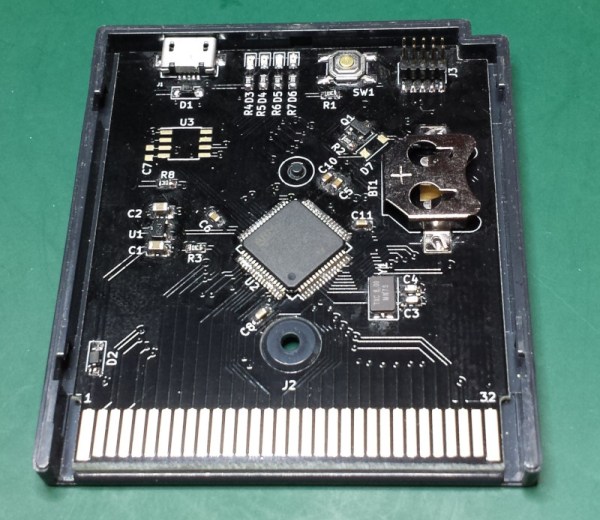 The original Game Boy was a smash success for Nintendo and has an amazing collection of games. You might relive some childhood nostalgia by booting up a Game Boy emulator, but to really get the full experience you’ll need the battery-draining green-tinted original hardware. Thanks to modern technology you can also load all of the games at one time on the original hardware with this STM32 cartridge that fits right in.

The device can load any Game Boy game (and homebrews) and ROMs can be sent to the cartridge via USB. There were are a lot of hurdles to getting this working properly, the largest of which is power management. A normal cartridge has a battery backup for save data, but using a small coin cell to run an STM32 would kill the battery quickly. To get around that, the cartridge writes the states to nonvolatile memory and then shuts itself off, although this has the side effect of crashing the Game Boy.

The creator of this project, [Emeryth], noted that we featured a similar project from [Dhole] a few years ago, also involving an STM32. [Emeryth] decided that it would be fun to build his own project anyway, and it’s certainly an interesting take on GameBoy hacking. He also has the files for this project available on his Git Hub page. 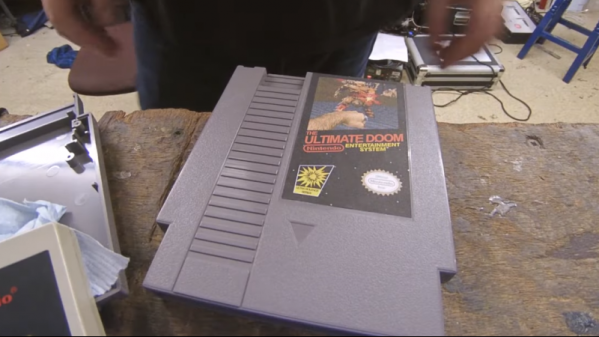 Doom was a breakthrough game for its time, and became so popular that now it’s essentially the “Banana For Scale” of hardware hacking. Doom has been ported to countless devices, most of which have enough processing ability to run the game natively. Recently, this lineup of Doom-compatible devices expanded to include the NES even though the system definitely doesn’t have enough capability to run it without special help. And if you want your own Doom NES cartridge, this video will show you how to build it.

We featured the original build from [TheRasteri] a while back which goes into details about how it’s possible to run such a resource-intensive game on a comparatively weak system. You just have to enter the cheat code “RASPI”. After all the heavy lifting is done, it’s time to put it into a realistic-looking cartridge.

To get everything to fit in the donor cartridge, first the ICs in the cartridge were removed (except the lockout IC) and replaced with custom ROM chips. Some modifications to the original board have to be soldered together as well, since the new chips’ pinouts don’t match perfectly. Then, most of the pin headers on the Raspberry Pi and the supporting hardware have to be removed and soldered together. Then, [TheRasteri] checks to make sure that all this extra hardware doesn’t draw too much power from the NES and overheat it.

The original project was impressive on its own, but with the Doom cartridge completed this really makes it the perfect NES hack, and also opens up the door for a lot of other custom games, including things like Mario64.