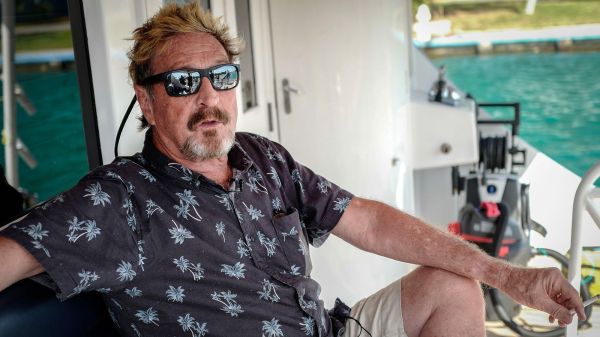 John McAfee, the founder of McAfee Associates and pioneer in the antivirus field, was found dead today, June 23, 2021, of an apparent suicide in a Barcelona prison cell.

Born in 1945, the term “colorful” doesn’t begin to describe the life of McAfee. His entree into the nascent computer industry began with a degree in mathematics, followed by choice assignments at places like Xerox PARC, NASA, Univac, Booz Allen Hamilton, and Lockheed. He built up an impressive resume of programming skills until serendipity struck, in the form of one of the earliest computer viruses: the Brain virus. First found in the mid-1980s, Brain infected the boot sector of floppy disks and was originally intended as a somewhat heavy-handed form of copy protection by its authors. The virus rubbed McAfee the wrong way, and he threw himself into writing software to protect PCs from such infections. These were the roots of McAfee Associates, which opened its doors in 1987.

END_OF_DOCUMENT_TOKEN_TO_BE_REPLACED

It was around the year 1590 when mankind figured out how to use optical lenses to bring into sight things smaller than the natural eye can observe. With the invention of the microscope, a new and unexplored world was discovered. It will likely be of great surprise to the reader that scientists of the time did not believe that within this new microscopic realm lay the source of sickness and disease. Most would still hold on to a belief of what was known as Miasma theory, which dates back to the Roman Empire. This theory states that the source of disease was contaminated air through decomposing organic materials. It wouldn’t be until the 1850’s that a man by the name of Louis Pasteur, from whom we get “pasteurization”, would promote Germ Theory into the spotlight of the sciences.

Pasteur, considered by many as the father of microbiology, would go on to assist fellow biologist Charles Chameberland in the invention of the aptly named Pasteur Chamberland filter — a porcelain filter with a pore size between 100 and 1000 nanometers. This was small enough to filter out the microscopic bacteria and cells known at that time from a liquid suspension, leaving behind a supply of uncontaminated water. But like so many other early scientific instrumentation inventions it would lead to the discovery of something unexpected. In this case, a world far smaller than 100 nanometers… and add yet another dimension to the ever-shrinking world of the microscopic.

This is when we began to learn about viruses.

END_OF_DOCUMENT_TOKEN_TO_BE_REPLACED Many computer users rely on antivirus software from McAfee and Symantec to protect their computers from malware, worms, and viruses. Since the creation of viruses outpaces the protection abilities of the software, antivirus protection lags behind and may not be as secure as you think. [Gary Warner] provides some examples of current malware making the rounds that continue to be unaddressed by anti-virus vendors, including the recent “CNN Alerts: Breaking News” spam, which morphed into MSNBC alert spoofs. Our advice? Keep your antivirus software updated, but don’t believe that it will catch everything for you. Only open files from sources you know and trust. The DShield project is hoping to change how we protect our networks from malware with predictive blacklisting. Using a method similar to Google’s PageRank, DShield collects logs from network administrators to help develop a score based on maliciousness. They combine this score with information about where the malware has already hit to determine an overall threat level.

Similar to antivirus programs, the system still relies on networks being attacked to rate the threat level. They have shown though, that the predictive method is consistently more effective than manual blacklisting. The system has been available for free for the past year. Those utilizing the system have been reporting positive results. They do note that there are a few people whose network infrastructure doesn’t match up with the predictions very well. If you would like to participate, go to their site and sign up.