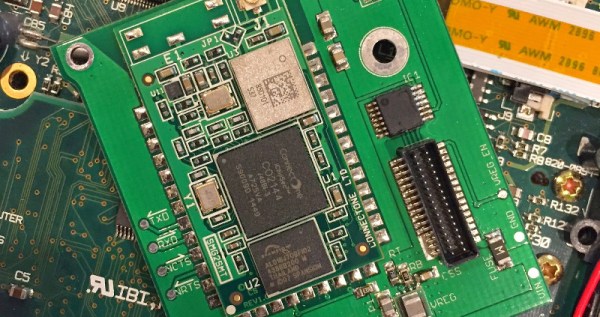 [Jake] has the king of the Newtons – a MessagePad 2100. There’s a hidden port in this machine for a modem card, but Apple never made one. While other Newton aficionados trudge along with old PCMCIA WiFi cards that only support 802.11a without WPA2, [Jake] thought it would be possible to build a modern WiFi card for the Newton. He succeeded, opening the door to modern networking apps on the finest tablet Apple will ever make.

Oddly, this isn’t [Jake]’s first attempt at expanding the capabilities of his Newton. There’s an internal serial port inside the MessagePad 2×00, and a few years ago [Jake] tried to build an internal Bluetooth card. The RF design didn’t work, but with a few more years of experience, [Jake] figured he had the skills for the job.

The critical piece of hardware for this build isn’t an ESP8266 or other common WiFi module. Instead, a WiReach module from ConnectOne was used for the built-in PPP server. This allows legacy hardware to use standard AT modem commands to access a WiFi network. It’s a very interesting module; there is a lot of hardware out there that speaks PPP natively, and a module like this could be a drop-in replacement for a modem.

That said, thanks to unintelligible and ‘Apple Classified’ documentation, getting this card working wasn’t easy. The APIs to access the internal serial slot were never documented, and it took a bit of time with a disassembler to figure out how to address the port correctly.

[Jake] has pushed all the files for his project up to Github. This includes the design files for the PCB, the Newton software that enables WiFi, and a nifty 3D printed port cover that shows off the new wireless capabilities of Apple’s greatest tablet.