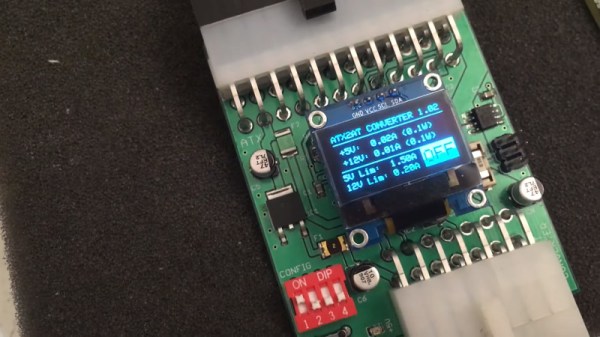 Over the years, computers have become faster, but at the same time, more power hungry as well. Way back around the 386 era, most PCs were using the AT standard for power supplies. Since then, the world moved on to the now ubiquitous ATX standard. Hobbyists working on older machines will typically use these readily available supplies with basic adapters to run old machines, but [Samuel] built a better one.

Most AT to ATX adapters are basic passive units, routing the various power lines where they need to go and tying the right pin high to switch the ATX supply on. However, using these with older machines can be fraught with danger. Modern supplies are designed to deliver huge currents, over 20 A in some cases, to run modern hardware. Conversely, a motherboard from the early 90s might only need 2 or 3A. In the case of a short circuit, caused by damage or a failed component, the modern supply will deliver huge current, often damaging the board, due to the overcurrent limit being set so high.

[Samuel]’s solution is to lean on modern electronics to build an ATX to AT adapter with programmable current protection. This allows the current limit to be set far lower in order to protect delicate boards. The board can be set up in both a “fast blow” and a “slow blow” mode to suit various working conditions, and [Samuel] reports that with alternative cabling, it can also be used to power up other old hardware such as Macintosh or Amiga boards. The board is even packed with extra useful features like circuitry to generate the sometimes-needed -5V rail. It’s all programmed through DIP switches and even has an OLED display for feedback.

It’s an adapter that could save some rare old hardware that’s simply irreplaceable, and for that reason alone, we think it’s a highly important build. We’ve talked about appropriate fusing and current limiting before, too – namely, with LED strips.

If you got an old PC/XT stored somewhere in basement and want to use a newer keyboard, here’s a little project you might like. [Matt] built an AT2XT keyboard adapter on a prototype board using an AT to PS/2 keyboard cable. An AT2XT keyboard adapter basically allows users to attach AT keyboards to XT class computers, since the XT port is electronically incompatible with PC/AT keyboard types. For those retro computing fans with a lot of old PCs, this trick will be great to connect the XT machines to a KVM (keyboard/Video/Mouse) switch.

[Matt] found schematics for the project on the Vintage Computer Federation Forum, but used a PIC12F675 instead of the specified PIC12F629. He does provide the .hex file for his version but unfortunately no code. You could just burn the .hex file or head up to the original forum and grab all files to make your own version. The forum has the schematics, bill of materials, PCB board layout and firmware (source code and .hex), so you just need to shop/scavenge for parts and get busy.

And if you are felling really 31337, you can make a PS/2 version of the binary keyboard to justify the use of your new adapter.