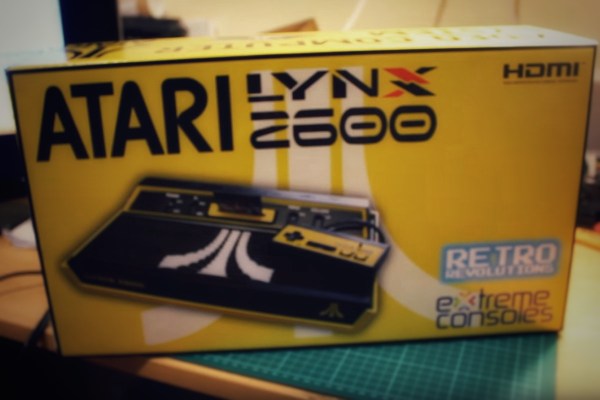 With its introduction in 1989, the Atari Lynx was the first handheld videogame system to include a color LCD. The gigantic size and equally gigantic price tag did not win-over a massive audience, but that doesn’t mean the Lynx was without its fans. Over the past few months a modder named [Jared] has been toiling away with his project to transform an Atari Lynx into a home console. 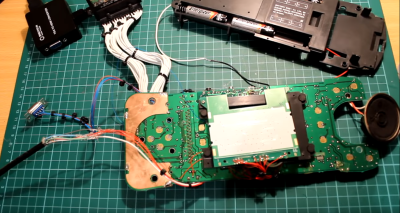 The inspiration behind the mod was the original Atari console, the Atari 2600. [Jared’s] console mod, called the Atari Lynx 2600, utilizes a four-switch 2600 case as an enclosure. However, since the Atari 2600 joystick did not offer enough button real estate an NES controller was used instead. A male-male serial cable serves as the new controller cord, while all the buttons on the face of the Lynx are hardwired to a female DB9 port. As an added touch a custom 3D printed cartridge adapter was incorporated into the original 2600 cartridge slot.

Since the Lynx did not natively support video out, and intermediary device known as the McWill LCD mod kit was used. The McWill LCD mod is typically done in order to modernize the Atari Lynx’s screen with hardware from this decade, but [Jared] used the kit in order to get VGA video output from the Lynx. Not satisfied with just VGA [Jared] also included a VGA to HDMI scaler inside to ensure a wider compatibility with current displays. Fittingly the HDMI port was placed on the back of the 2600 enclosure where the RF video used to come from.

Bonus points should go to [Jared] for going the extra mile and creating a custom console box to accompany the console mod. The entirety of the project was detailed in a three-part video series, but you can watch the console in action in part 2 below:

END_OF_DOCUMENT_TOKEN_TO_BE_REPLACED

Where do you go if you want crazy old electronic crap? If you’re thinking a ham swap meet is the best place, think again. [Fran] got the opportunity to clean out the storage closet for the physics department at the University of Pennsylvania. Oh, man is there some cool stuff here. This room was filled to the brim with old databooks and development boards, and a sample kit for the unobtanium Nimo tube.

The Gigatron is a Hackaday Prize entry to build a multi-Megahertz computer with a color display out of TTL logic. Now, all this work is finally paying off. [Marcel] has turned the Gigatron into a kit. Save for the memories, this computer is pretty much entirely 74-series logic implemented on a gigantic board. Someone is writing a chess program for it. It’s huge, awesome, and the kits should cost under $200.

What’s cooler than BattleBots, and also isn’t Junkyard Wars? BattleBots, but in drone form. Drone Clash was originally announced in March, but now they’re moving it up to February to coincide with the TUS Expo. What could be better than flaming piles of lithium?

The Atari Lynx went down in history as the first portable console with a color LCD. There was a problem with the Lynx; the display was absolutely terrible. [RetroManCave] found someone selling an LCD upgrade kit for the Lynx, and the results are extremely impressive. The colors aren’t washed out, and since the backlight isn’t a fluorescent light bulb (yes, really), this Lynx should get a bit more run time for each set of batteries.

Like dead tree carcasses? You need to butcher some dead tree carcasses. The best way to do this is on a proper workbench, and [Paul Sellers] is working on a video series on how to make a workbench. He’s up to episode 3, where the legs are mortised. This is all done with hand tools, and the videos are far more interesting than you would think.

If you need some very small, very blinky wearables, here’s an option. This build is literally three parts — an LED matrix, an ATtiny2313, and a coin cell battery. Seems like this could be an entry for the Coin Cell Challenge we have going on right now.