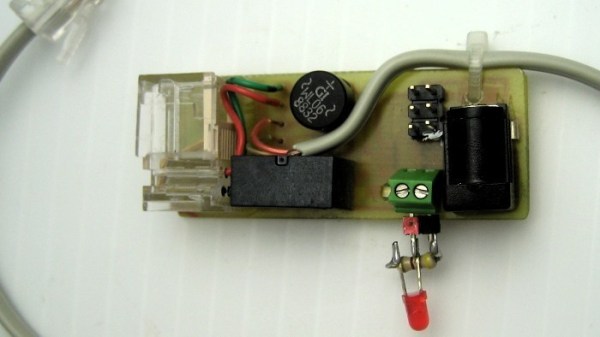 Sorry to bear sad tidings, but your car’s extended warranty is about to expire. At least that’s what you’ll likely hear if you answer one of those robocalls that have descended like a plague upon us. We applaud any effort to control the flood of robocalls, even if it means supplementing a commercial blocking service with a DIY ring-blocker.

The commercial service that [Jim] engaged to do his landline blocking is called Nomorobo – get it? It uses the Simultaneous Ringing feature many VoIP carriers support to intercept blacklisted robocallers, but with a catch: it needs caller ID data, so it lets the first ring go through. [Jim]’s box intercepts the ringing signal coming from his Xfinity modem using a full-wave rectifier and an analog input on an Arduino. Once the ring pattern is received, the Arduino flips a relay that connects all the phones in the house to the line, letting the call ring through. If Nomorobo has blocked the call, he’ll never hear a thing. There were a few glitches to deal with, like false positives from going off- and on-hook, but those were handled in software. There’s also a delay in displaying caller ID information on his phones, but it’s a small price to pay for peace.

Any escalation in the war on robocalls is justified, and we applaud [Jim] for his service. Should you feel like joining the fray, step one is to know your enemy. This primer on robocalling will help.

Thanks to [Phil] for the tip.