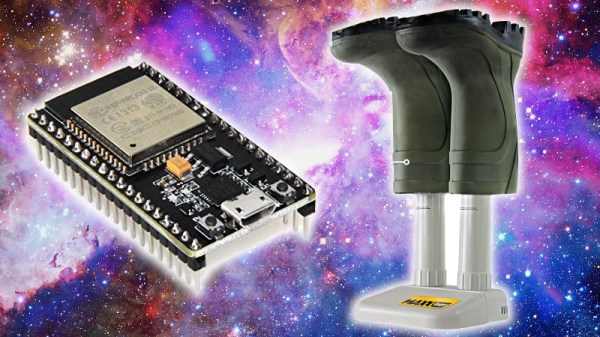 If you live somewhere cold, where the rain, snow and slush don’t abate for weeks at a time, you’ve probably dealt with wet boots. On top of the obvious discomfort, this can lead to problems with mold and cause blisters during extended wear. For this reason, boot dryers exist. [mark] had a MaxxDry model that had a timer, but it wasn’t quite working the way he desired. Naturally, it was begging to be hooked up to the Internet of Things.

The brains of the dryer is an ESP32, a solid choice for such a project. With WiFi on board, connecting the device to the internet is a snap. Relays are used to control the fan and heater inside the boot dryer, while MQTT helps make the device controllable remotely. It can be manually switched on and off, or controlled to always switch on at a certain time of the day.

It’s a simple project that shows how easily a device can be Internet controlled with modern hardware. For the price of a cheap devboard and a couple of relays, [mark] now has a more functional dryer, and toasty feet to boot.

We don’t see a lot of boot hacks here, but this magnet-equipped footwear is quite impressive.

Human ancestors have been walking around on two legs for a few million years. We’d imagine that by now we’ve figured out a pretty efficient mechanism for getting around. Unconvinced, however, researchers at Carnegie Mellon University have developed an “exo”-boot that reduces the metabolic rate of walking by seven percent. Best of all, the mechanism requires no additional source of active power input besides the human legs that are wearing them.

Upon close inspection, the boots reduce the overall applied torque at the angle joint at a critical point where the heel begins to lift off the ground. Energy in, energy out. The spring ratchets to a loaded position as the user plants their foot. This ratchet releases, re-engaging the stored spring force as the user brings their heel back off the ground. A seven percent reduction in metabolic rate may not sound like much, but, according to the paper, it’s the equivalent of about four kilograms less weight in your backpack on that next hiking trip.

As for what specific costs are being reduced to lower the body’s metabolic rate, the researchers still aren’t completely sure. An off-the-cuff look at the joints and moments from a mechanics perspective won’t give us a sure-fire answer since the energy consumption processes of muscles are, well, complicated. In fact, by varying spring stiffness in their design, they discovered that springs that were either too stiff or too loose had no effect on the metabolic rate. Yes, they’ve certainly stumbled on a sweet spot in terms of well-mixed circumstances, but the answer behind why the new robot-legs work so smoothly will be a study for the future.

If you haven’t jumped into the world of exo-skeleton building, let [James Hobson] be your guide into pushing our bounds with homebrew mechanical advantages. Now let’s keep our fingers crossed for some long-fall boots.