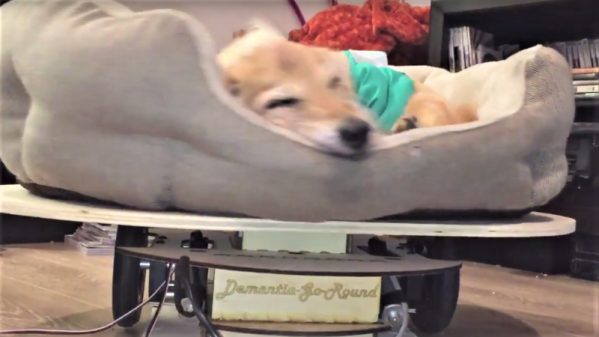 When [Jason Dorie] tipped us off on this, he said, “This barely qualifies as a hack.” We disagree, as would any other dog lover who sees how it improved the life of his dog with a simple mood-altering doggie-bed carousel.

[Jason]’s hack lies not so much in the rotating dog bed – it’s just a plywood platform on a bearing powered by a couple of Arlo robot wheels. The hack is more in figuring out what the dog needs. You see, [Thurber] is an old dog, and like many best friends who live a long life, he started showing behavioral changes, including endlessly pacing out the same circular path to the point of exhaustion. Circling in old dogs is often a symptom of canine cognitive dysfunction, which is basically the dog version of Alzheimer’s. Reasoning that the spinning itself was soothing, [Jason] manually turned [Thurber]’s dog bed on the floor. [Thurber] calmed down immediately, so the bittersweetly named “Dementia-Go-Round” was built.

Sadly, [Thurber] was actually suffering from a brain tumor, but he still really enjoyed the spinning and it gave him some peace during his last few days. Looking for hacks to help with human dementia? We’ve had plenty of those before too.