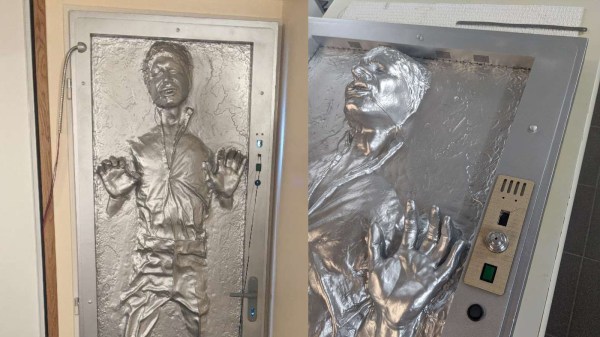 Every fan of the original Star Wars trilogy knows the plight of Han Solo, who was so cruelly frozen in carbonite by Imperial forces. [erv.plecter] came into possession of a replica Solo, this time frozen in polyurethane, and set about using it as the door for a home theater setup.

Just like in the movie, there are a series of controls and lights on the side of the door, clearly intended to represent the state of the carbonite block and the smuggler trapped within. This was achieved with the use of a SAMD51 microcontroller, which controls five meters of WS2812B LED strip along with a small OLED display.

There’s also an amazing little smoke effect, built using a vape inhaler. These devices have proved popular for all kinds of theme builds and costumes, as it turns out. They’re a great way to produce a visible fog or smoke in a tiny, compact package.

[erv.plecter] was kind enough to share plenty of details on the build, including how the polyurethane cast was assembled into the door. The final result looks remarkably authentic, and would surely prove a hit at any Star Wars movie night. Just don’t spoil things by forcing everyone to sit through Revenge of the Sith. Video after the break. END_OF_DOCUMENT_TOKEN_TO_BE_REPLACED

Kyocera is vastly expanding their product lineup with the Shop Sink 3530. The perfect addition to your copiers, fax machines, and laser printers.

About a year and a half ago and with objections from the editorial staff, we did a Top 10 hacking fails in movies and TV post. The number one fail is, “Stupid crime shows like NCIS, CSI, and Bones.” A new show on CBS just topped this list. It’s named Scorpion, and wow. Dropping a Cat5 cable from an airplane doing an almost-touch-and-go because something is wrong with the computers in the tower. Four million adults age 18-49 watched this. [Derek] found something that really looks like the Hackaday logo in a spacer of some kind. It’s been sitting on his shelf for a few months, and is only now sending it in. He picked it up in a pile of scrap metal, and he (and we) really have no idea what this thing is. Any guesses?

[Sheldon] has a teardown of a vintage voltage and current standard. Just look at those hand drawn traces on a single sided board. Beautiful.

[Art] has another, ‘what is this thing’. He has two of them, and he’s pretty sure it’s some sort of differential, but other than that he’s got nothing. The only real clue is that [Art] lives near a harbor on the N. Cali coast. Maybe from a navigation system, or a governor from a weird diesel?

So you have a Kinect sitting on a shelf somewhere. That’s fine, we completely understand that. Here’s something: freeze yourself in carbonite. Yeah, it turns out having a depth sensor is exactly what you need to make a carbonite copy of yourself. We at [HAD] love any hack that combines children’s toys with science-fiction technology, so seeing a Tickle-Me-Elmo “frozen” in [Carbonite] is a definite win in our book. It’s also a great argument for joining your local Hackerspace, or just getting together with some like-minded friends. This idea came out of an impromptu brain-storming, or “talking about crazy ideas session” at the [Baltimore Node] hackerspace.

Fortunately [Todd] had access to all the tools necessary to make this “crazy idea” a reality. A [Shopbot] was used to cut out the box, and the side panels were 3D printed with help from these files on Thingiverse. For processing, an [ATtiny85] programmed using an Arduino was used to power this project.

There’s no mention of whether [Todd] would be willing to part with his creation, however, we would guess that there would be no bargaining with him. He’s not going to give up his favorite decoration easily.