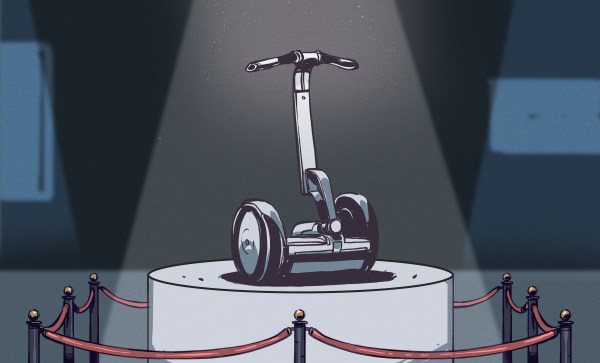 Now, with the announcement that Segway will stop production on their eponymous personal transporter in July, we can confidently say that history will look back on it as one of the most over-hyped pieces of technology ever created. But that’s not to say Kamen’s unique vehicle didn’t have an impact. END_OF_DOCUMENT_TOKEN_TO_BE_REPLACED

60 minutes has covered [Dean Kamen]’s modular robotic arm.  This thing is light weight, adjustable for different body frame sizes, modular, and eventually thought controlled. The system is currently functioning quite well, as you can see in the video. Current testers are controlling it with buttons under their toes, but the thought control is in the later stages of development. Sounds like science fiction right? You can see a monkey using a thought controlled arm to feed itself grapes, though we don’t think it is [Dean]’s arm.

Another cool feature of this arm is the fact that it changes its grip on your body depending on how much weight you are lifting. Lift something heavy and it grips harder.  Though it has a lot of the same information, there is a little bit of different footage in [Dean]’s TED talk about the arm.

It seems to us, with microcontrollers becoming so cheap and accessible that we should be seeing more home made contraptions in this area. Are any of you working with prosthetics?

[Dean Kamen]’s company, the people behind the Segway, have created a hybrid car that uses a Stirling engine instead of a standard internal combustion engine. Stirling engines are closed cycle, meaning heat is applied to the outside of the cylinder walls. They are generally more efficient than standard car engines, but haven’t been used much outside of industrial applications. We suspect that the drivetrain arrangement is similar to the Chevy Volt where the engine is used to charge batteries which are in turn driving an electric motor. This is different from modern hybrids that can have either electric motor or gas engine driving the wheels. The article is unfortunately full of classic [Kamen] hyperbole and minimal detail. He calls the Stirling engine “an insurance policy” for the electric car since it can recharge the battery. That’s right, folks. If you run out of juice, you can put gas in the car. I doubt many Prius owners will fall out of their chair over that. Being a Stirling engine, we’d be more impressed if you could charge the thing by rubbing warm toast on it.