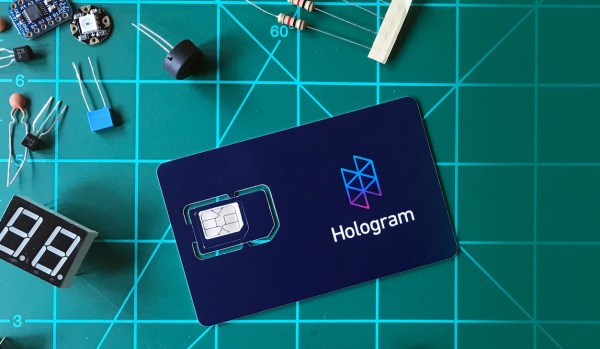 If you’ve been thinking of adding cellular connectivity to a build, here’s a way to try out a new service for free. Hologram.io has just announced a Developer Plan that will give you 1 megabyte of cellular data per month. The company also offers hardware to use with the SIM, but they bill themselves as hardware agnostic. Hologram is about providing a SIM card and the API necessary to use it with the hardware of your choice: any 2G, 3G, 4G, or LTE devices will work with the service.

At 1 MB/month it’s obvious that this is aimed at the burgeoning ranks of Internet of Things developers. If you’re sipping data from a sensor and phoning it home, this will connect you in 200 countries over about 600 networks. We tried to nail them down on exactly which networks but they didn’t take the bait. Apparently any major network in the US should be available through the plan. And they’ve assured us that since this program is aimed at developers, they’re more than happy to field your questions as to which areas you will have service for your specific application.

The catch? The first taste is always free. For additional SIM cards, you’ll have to pay their normal rates. But it’s hard to argue with one free megabyte of cell data every month.

Hologram originally started with a successful Kickstarter campaign under the name Konekt Dash but has since been rebranded while sticking to their cellular-connectivity mission. We always like getting free stuff — like the developer program announced today — but it’s also interesting to see that Hologram is keeping up with the times and has LTE networks available in their service, for which you’ll need an LTE radio of course.