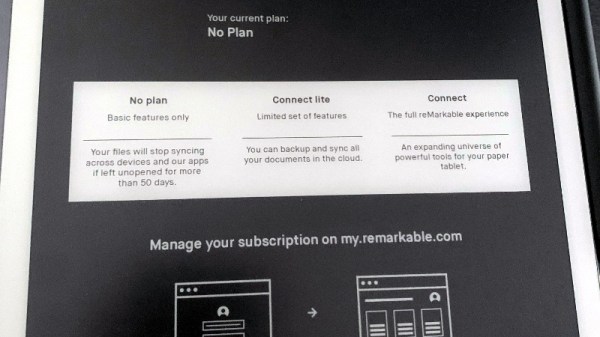 We’ve been keeping a close eye on the development of electronic paper tablets such as the reMarkable for a while now. These large-format devices would be a great way to view schematics and datasheets, and with the right software, could easily become an invaluable digital sidekick. Unfortunately, a troubling discovery made in a beta version of the reMarkable firmware is a strong indication the $400 USD device may be heading down a path that many in this community wouldn’t feel comfortable with.

While trying to get a reMarkable tablet running firmware version 2.10.0.295 synced up to self-hosted server using rmfakecloud, Reddit user [dobum] was presented with a very unusual prompt. The tablet displayed several subscription levels, as well as brief description of what each one unlocked. It explained that standard users would get “basic functions only”, while the highest tier subscription would unlock an “expanding universe of powerful tools” for the e-paper tablet. In addition, only recently used documents would be synced with the cloud unless you had a paid subscription.

END_OF_DOCUMENT_TOKEN_TO_BE_REPLACED 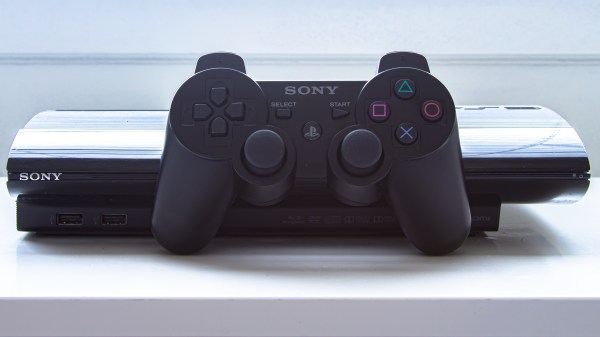 END_OF_DOCUMENT_TOKEN_TO_BE_REPLACED

We often hear people touting the evilness of DRM, but usually they are talking about the idea of ownership. In this case, DRM is actually causing harm. It turns out that Microsoft’s msnetobj.dll, which is supposed to enforce DRM on your computer, stopping you from doing certain things like saving files you don’t “own” is open to 3 attacks.  Vulnerable to buffer overflow, integer overflow, and denial of service, this sucker is riddled with issues.

The vulnerabilities in this file aren’t groundbreaking. Buffer overflow is a common method to get to many systems. The problem here, according to some commenters at BoingBoing, is the fact that this DLL is called every time you open a media file.