nRF24L01+ PA/LNA module specs look great on paper. Wireless communication up to 1000m in a small package readily available from a variety of cheap sources in China? The hard work of software connectivity already done by a variety of open source projects? Sounds great! But if you mashed BUY and are getting maybe 1% of that range, don’t worry because thanks to these clear directions, they can be fixed.

END_OF_DOCUMENT_TOKEN_TO_BE_REPLACED 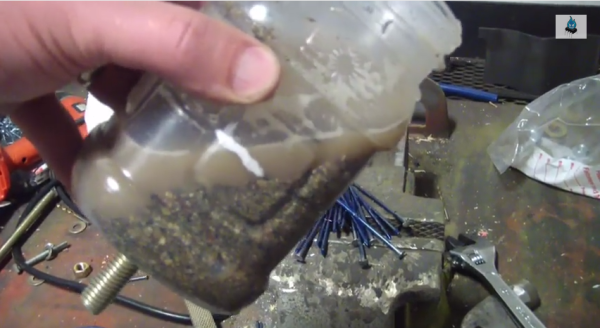 [Chris] finds the average price of rock tumblers insulting. Almost as insulting, in fact, as prepackaged fruit salad made with Chinese peaches. While there may be little he can do about the peaches, he has given the finger to lapidary pricing by making his own tumbler on the very cheap.

Simply put, he drilled a hole in bottom of the peach vessel and then stuck a threaded rod through it. He held the rod in place with a nut and a washer. After securing the proper permits to source sand and water from his property, he put both in the jar along with some old nails that had paint and crud on them. [Chris] put the rod in the chuck of his drill and clamped the drill in his bench vise. Half an hour later, he had some nice, shiny nails. Make the jump to be amazed and entertained. If you prefer using balls, check out this homemade mill.