A polygraph is commonly known as a lie detector but it’s really just a machine with a number of sensors that measure things like heart rate, breathing rate, galvanic skin response and blood pressure while you’re being asked questions. Sessions can be three hours long and the results are examined by a trained polygraph examiner who decides if a measured reaction is due to deception or something else entirely. Modern polygraphs feed data into a computer which analyses the data in real-time.

Cornell University students [Joyce Cao] and [Daria Efimov] decided to try their hand at a more old fashioned polygraph that measures heart and breathing rates and charts the resulting traces on a moving strip of paper as well as a color TFT display. They had planned on measuring perspiration too but didn’t have time. To measure heart rate, electrodes were attached to the test subject’s wrists. To measure breathing they connected a stretch sensor in the form of a conductive rubber cord around three inches long to a shoelace and wrapped this around the test subject’s abdomen.

While the output doesn’t go into a computer for mathematical analysis, it does go to a PIC32 for processing and for controlling the servos for drawing the traces on the paper as well as displaying on the TFT. The circuit between the breathing sensor and the PIC32 is fairly simple, but the output of the heart rate electrodes needed amplification. For that they came up with a circuit based off another project that had a differential amplifier and two op-amps for filtering.

Since parts of the circuit are attached to the body they made some effort to prevent any chance of electrocution. They used 12 volts, did not connect the test subject to power supply chassis ground, and tested the heart rate electrodes with a function generator first. They also included DC isolation circuitry in the form of some resistors and capacitors between the heart rate electrodes and the amplifier circuit. You can see these circuits, as well as a demonstration in the video below. The heart rate output looks a little erratic, no surprise given that the body produces a lot of noise, but the breathing trace looks very clear.

END_OF_DOCUMENT_TOKEN_TO_BE_REPLACED 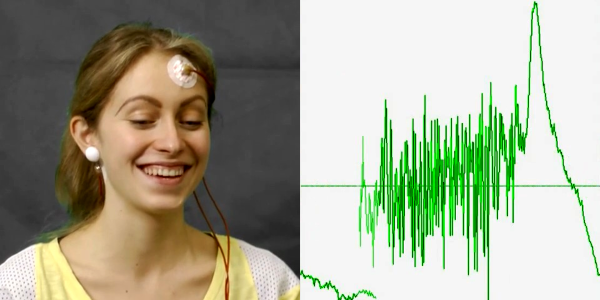 DIY medical science is fun stuff. One can ferret out many of the electrical signals that make the body run with surprisingly accessible components and simple builds. While the medical community predictably dwells on the healthcare uses of such information, the hacker is free to do whatever he or she wants.

A good first start is to look at the relatively strong electrical signals coming off of the heart and other muscles. [Bernd Porr] has put together a simple bioamplifier circuit, and his students have made a series of videos explaining its use that’s well worth your time if you are interested in these things.
END_OF_DOCUMENT_TOKEN_TO_BE_REPLACED Our own Hack-A-Day emeritus took some time out from his showgirl pursuits to pass this along. The ECG was built to pad a resume, but it doesn’t make it less useful. Be warned, too much power could stop your heart. If you build one, triple check everything before wiring yourself up. Basically, an electrical differential is generated by the contraction of muscles in the heart. This slight signal is amplified by an op-amp and sampled with an A/D converter.