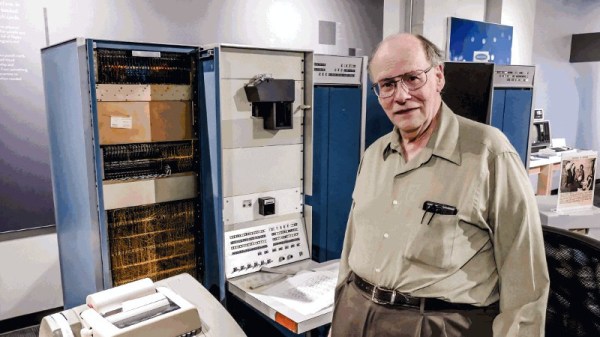 WIth the 50th birthday of the UNIX operating system being in the news of late, there has been a bit of a spotlight shone upon its earliest origins. At the Living Computers museum in Seattle though they’ve gone well beyond a bit of historical inquiry though, because they’ve had UNIX (or should we in this context say unix instead?) version 0 running on a DEC PDP-7 minicomputer. This primordial version on the original hardware is all the more remarkable because unlike its younger siblings very few PDP-7s have survived.

The machine running UNIX version 0 belongs to [Fred Yearian], a former Boeing engineer who bought his machine from the company’s surplus channel at the end of the 1970s. He restored it to working order and it sat in his basement for decades, while the vintage computing world labored under the impression that including the museum’s existing machine only four had survived — of which only one worked. [Fred’s] unexpected appearance with a potentially working fifth machine, therefore, came as something of a surprise.

To load the OS a disk emulator was connected to the machine, and for possibly the first time in many decades a new UNIX version 0 device driver was written to enable it to be used. The first login was the user “dmr”, a homage to UNIX co-creator Dennis M. Ritchie.