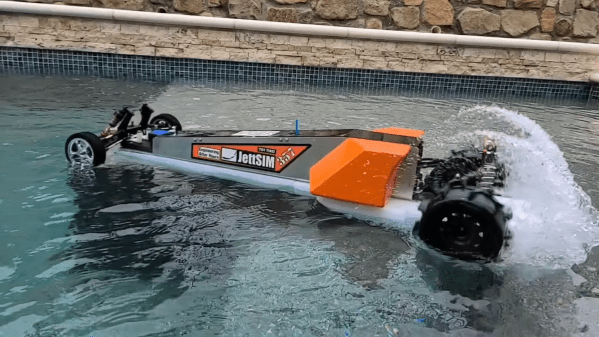 Dragsters are typically about peak performance on a tarmac drag strip. [Engineering After Hours] took a different tack, though, building a radio-controlled amphibious dragster intended to cross small bodies of water.

The build is based on a Traxxas Raptor RC car. However, it’s been heavily reworked from a pickup-like design to become a dragster with a motor mounted in the rear. It’s also been fitted with a foam underbody to allow it to float when stationary. The rear tires have been replaced with 3D-printed versions with large paddles, which provide propulsion in the water.

Initial tests showed the car struggled to make progress in the water, as the paddle tires tended to drag the rear end deeper under water. The tiny dragster tires up front didn’t help it steer, in water either. Large foam discs were added to the front tires to enable them to act as better rudders.

Fitted with its water tires and foam floatation aids, the car can only drive slowly on land, but [Engineering After Hours] points out this is enough to call it amphibious. It does a better job at skittering around on water, and it was able to cross a local pond at low speed.

We’ve seen some other creative techniques for making amphibious vehicles, like these crazy star-shaped wheels. Video after the break.

END_OF_DOCUMENT_TOKEN_TO_BE_REPLACED 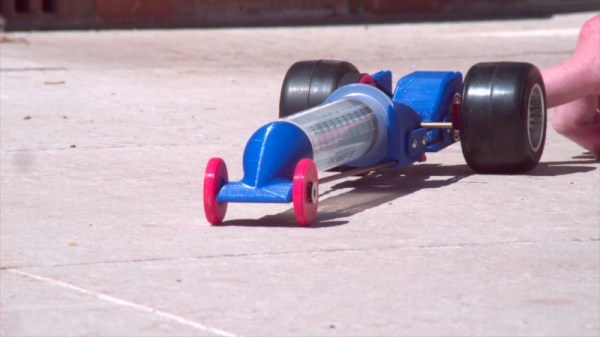 Atmospheric pressure is all around us, and capable of providing a great deal of force when used properly. As Otto Von Guericke demonstrated with his Magdeburg hemispheres over 350 years ago, simply removing air from a chamber to create a vacuum can have astounding results. More recently, [Tom Stanton] has used vacuum to power a small 3D-printed dragster.

In the dragster build, a typical plunger syringe is plugged at the end, and the plunger pulled back. Atmospheric pressure acts against the vacuum, wanting to push the plunger back towards its original position. To make use of this, a string is attached to the plunger, causing it to turn a gear as it moves forward, driving the rear wheels through a belt drive. With the correct gear ratio on the belt drive, the dragster is capable of spinning its tires and shooting forwards at a quick pace.

The work is a great follow on from [Tom]’s earlier vacuum experiments, using syringes as small rockets.  It reminds us of the classic CO2 dragsters from high school competitions, and would be a great project for any science class. Video after the break.