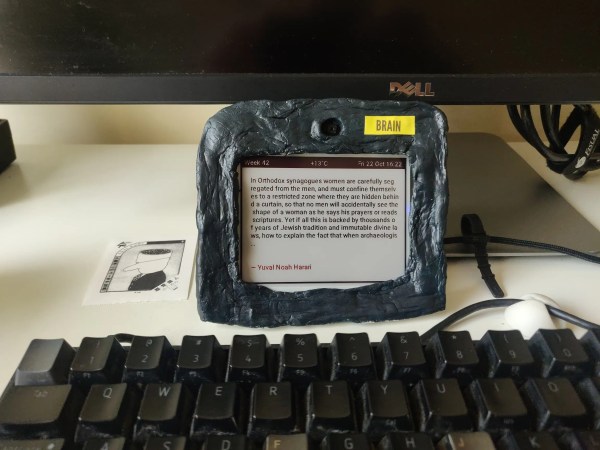 [zorbash] came up with a great side project while designing a way to read notes and highlighted sections from e-books without having to use Good Reads or the Amazon tool: build a gadget to display a parade of quotes from favorite authors and their books. The project is called Brain because it’s built on an IoT platform called Nerves.

As a bonus, the gadget functions as a Pomodoro timer of sorts — that’s the time management method where you work for 25-minute periods and take 5-minute breaks in between, with a longer break every four Pomodoros. Brain displays a quote for 25 minutes and then flashes the screen to draw [zorbash]’s attention to the fact that time is up. We think this is a nice, unobtrusive way to do things. There are no breaks built in, but that’s just how [zorbash] rolls.

The quotes are fetched using Bookworm, a script [zorbash] wrote that’s available on GitHub. It uses a Raspberry Pi 2 B, an SD card to store the JSON’d quotes, and a Wi-Fi dongle to allow the fetching. If you’re wondering about the enclosure, it’s made of clay.

If you like your Pomodoro timers a little more physical, here’s one that starts as soon as you plug it in to a USB port.