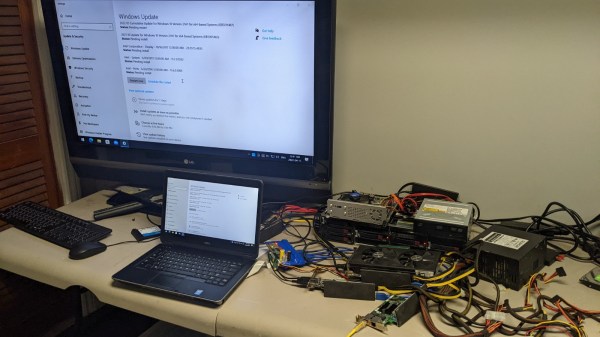 Did you ever feel like your laptop’s GPU was sub-optimal, or perhaps that your laptop could use a SAS controller? [Rob Rogers] felt like that too, so now he has the only Dell Latitude business-class laptop that’s paired with an AMD RX580 GPU – and more. Made possible because of a PCIe link he hijacked from the WiFi card, he managed to get a SAS controller, a USB 3.0 expansion card, the aforementioned GPU and a dual-port server network adapter, all in a single, desk-top setup, as the video demonstrates.

First off, we see a PCIe packet switch board based on a PLX-made chip, wrapped in blue tape, splitting a single PCIe x1 link into eight. The traditional USB 3.0 cables carry the downstream x1 links to the four PCIe cards connected, all laid out on [Rob]’s desk. [Rob] demonstrates that all of the cards indeed function correctly – the SAS controller connected to a server backplane with whole 22 TB of storage in it, a few devices plugged into a USB 3.0 card, an Ethernet cable with an active link in the network card, and wrapping up the video showing 3DMark results of the RX580 clearly paired with the laptop’s mobile CPU. There’s four more spots on the PCIe switch card, so if you wanted to connect a few NVMe SSDs without the costly USB enclosures that usually entails, you absolutely could! 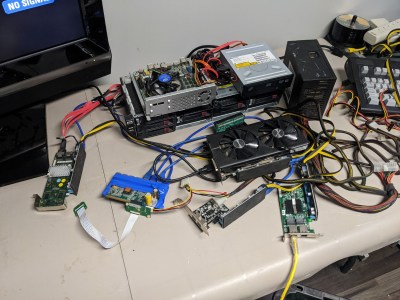 Now, there’s a reason why we don’t see more of such hacks. This seems to be a Latitude E5440 and the card is plugged into a mini-PCIe slot, which means the entire contraption is bound by a single PCI-E Gen2 x1 link, heavily offsetting the gains you’d get from an external GPU when, say, gaming. However, when it comes to the types and amount of peripherals, this is unbeatable – if you want to add an external GPU, high-speed networking and a SAS controller to the same computer that you usually lug around, there isn’t really a dock station you can buy for that!

Our collection of cool PCIe hacks has been growing, with hackers adding external GPUs through ExpressCard and mini PCIe alike, fitting PCIe slots where the factory refused to provide one, and extending the onboard M.2 slots for full-size PCIe cards. Nowadays, with these packet switches, it’s easy as ever to outfit any PCIe capable device with a whole slew of features – as this Raspberry Pi Computer Module motherboard with eleven PCIe slots demonstrates. Wonder how PCIe works, and why all of that is possible? We’ve written an entire article on that!

END_OF_DOCUMENT_TOKEN_TO_BE_REPLACED 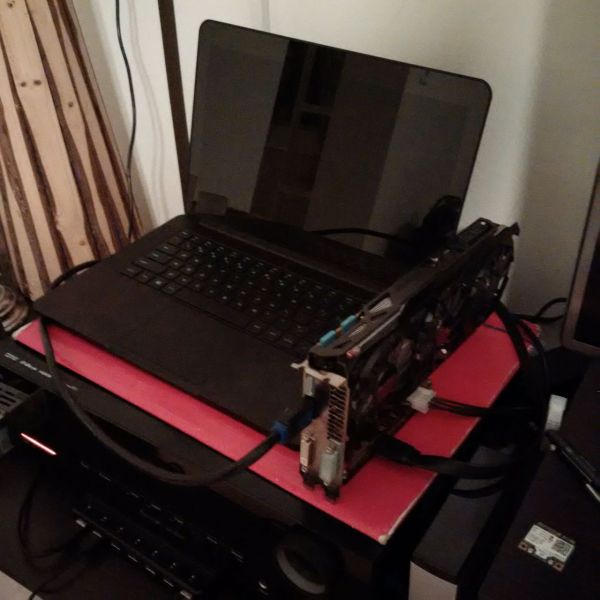 It used to be that desktop computers reigned king in the world of powerful computing, and to some extent, they still do. But laptops are pretty powerful these days, and in our experience, a lot of engineering companies have actually swapped over to them for resource hungry 3D CAD applications — But what if you still need a bit more power?

Well, [Kamueone] wasn’t satisfied with the performance of his Razer Blade GTX870m laptop, so he decided to hack it and give it its own external graphics card.

Now unfortunately this really isn’t quite a simple as running some PCIE extender cables — nope. You’ll have to modify the BIOS first, which according to [Kamueone], isn’t that bad. But after that’s done you’ll also need a way to mount your graphics card outside of the laptop. He’s using an EXP GDC Beast V6 which uses a mini PCIE cable that can be connected directly to the laptop motherboard. You’re also going to need an external power supply.

[Kamueone] ran some benchmarks and upgrading from the stock onboard GTX870m to an external GTX 780ti resulted in over three times the frame rate capability — 40fps stock, 130fps upgraded!