Back the late 2000s, when netbooks were the latest craze, some models would come with an inbuilt 3G modem for Internet access. At the time, proper mobile Internet was a hip cool thing too — miles ahead of the false prophet known as WAP. These modems would often slot into a Mini PCI-e slot in the netbook motherboard. [delokaver] figured out how to use these 3G cards over USB instead.

It’s actually a fairly straightforward hack. The Mini PCI-e standard has a couple of pins dedicated to USB data lines, which the modem in question uses for communicating with the host computer. Unfortunately it’s not quite as simple as just soldering on a four-wire USB cable. The modem relies on the 3.3V power from the Mini PCI-e slot instead of the 5V from USB. No problem, just get a low-dropout 3.3V regulator and run that off the USB port. Then, it’s a simple enough matter of figuring out which pins are used to talk to the SIM card, and soldering them up to a SIM adapter, or directly to the card itself if you’re so inclined. The guide covers a single model of 3G modem but it’s likely the vast majority of these use a very similar setup, so don’t be afraid to have a go yourself.

Overall Mini PCI-e is a fairly unloved interface, but we’ve seen the reverse of this hack before, a Mini PCI-e to USB adapter used to add a 12-axis sensor to a laptop. 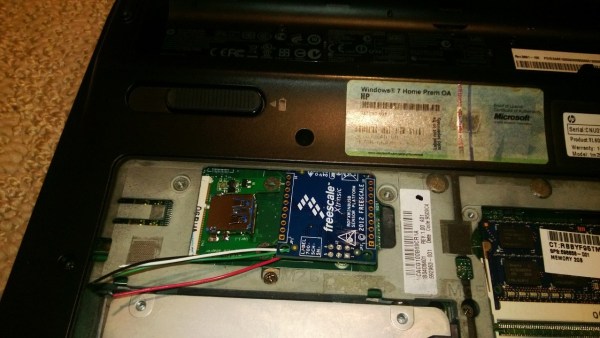 [Mal’oo] has one of those laptop computers whose screen swivels to turn it into a tablet. But the thing is a few years old and didn’t come with an orientation sensor that changes the screen between landscape and desktop, but also knows which side is up. His solution was to add a 12-axis sensor via the mini PCI express header.

The hardware comes in two pieces. The first is a mini-PCIe card to USB interface. This is handy if you want to add a Bluetooth dongle permanently to your computer. But he’s got other things in mind for it. After hacking the BIOS (which for some reason limits what you can plug into this slot) he moved onto the second part which is a USB 12-axis sensor. This picture shows the wires before they were soldered to the USB card. [Mal’oo] couldn’t just plug it in because the sensor wouldn’t have been oriented correctly in relation to the computer. The final product is quite response, as shown in the clip after the jump. END_OF_DOCUMENT_TOKEN_TO_BE_REPLACED

[tnkgrl] is back with part three of her Acer Aspire One hacking. This time she’s adding in 3G. You may look at the picture the above and think, “Cake. She just plugged the card in”. No, the Acer doesn’t ship with the mini-PCIe slot or the SIM card holder. First you have to solder a right angle mini-PCIe connector to the board pads and bridge two others to provide power. The SIM holder was another problem. She wasn’t able to find a pin compatible one. The one she installed is mounted to a riser so she could change the wiring order (let her know if you can find the correct part). This mod definitely requires some good soldering skills and she warns that even she managed to destroy a SIM in the process.

The Dell Mini 9 is another netbook that doesn’t have the appropriate connectors soldered on board, but JKK has a work-around. You need a 3G modem that has the SIM card on board. You plug it into the WiFi slot after taping over a few pins and then use a USB WiFi card instead.