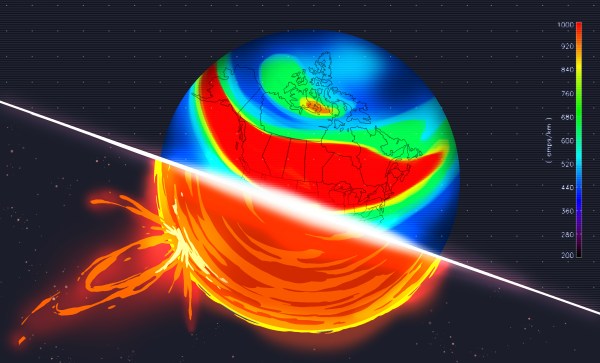 I found myself staring up at the sky on the night of March 13, 1989, with my girlfriend and her parents in the backyard of their house. The sky was on fire, almost literally. Red and pink sheets of plasma streamed out in a circle from directly overhead, with blue-white streaks like xenon flashes occasionally strobing across the sky. We could actually hear a sizzling, crackling sound around us. The four of us stood there, awestruck by the aurora borealis we were lucky enough to witness.

At the same time, lights were winking out a couple of hundred miles north in Québec province. The same solar storm that was mesmerizing me was causing fits for Hydro-Québec, the provincial power authority, tripping circuit breakers and wreaking havoc. This certainly wasn’t the first time the Sun threw a fit and broke systems on Earth, but it was pretty dramatic, and there are some lessons to be learned from it and other solar outbursts.

END_OF_DOCUMENT_TOKEN_TO_BE_REPLACED [Dr. Fortin] teaches physics at a French High School, and to get his students interested in the natural world around them, he built a geomagnetic observatory, able to tell his students if they have a chance at seeing an aurora, or if a large truck just drove by.

We’ve seen this sort of device before, and the basic construction is extremely similar – a laser shines on a mirror attached to magnets. When a change occurs in the local magnetic field, the mirror rotates slightly and the laser beam is deflected. Older versions have used photoresistors, but [the doctor] is shining his laser on a piece of paper and logging everything with a webcam and a bit of OpenCV.

The design is a huge improvement over earlier DIY attempts at measuring the local magnetic field, if only because the baseline between the webcam and mirror are so long. When set up in his house, the magnetometer can detect cars parked in front of his building, but the data he’s collecting (French, but it’s just a bunch of graphs) is comparable to the official Russian magnetic field data.