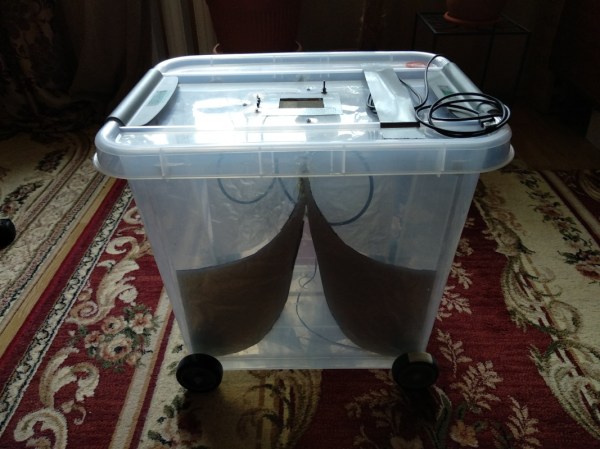 While you might think of radar pointing toward the skies, applications for radar have found their way underground as well. Ground-penetrating radar (GPR) is a tool that sends signals into the earth and measures their return to make determinations about what’s buried underground in much the same way that distant aircraft can be located or identified by looking for radar reflections. This technology can also be built with a few common items now for a relatively small cost.

This is a project from [Mirel] who built the system around a Arduino Mega 2560 and antipodal Vivaldi antennas, a type of directional antenna. Everything is mounted into a small cart that can be rolled along the ground. A switch attached to the wheels triggers the radar at regular intervals as it rolls, and the radar emits a signal and listens to reflections at each point. It operates at a frequency range from 323 MHz to 910 MHz, and a small graph of what it “sees” is displayed on an LCD screen that is paired to the Arduino.

Using this tool allows you to see different densities of materials located underground, as well as their depths. This can be very handy when starting a large excavation project, detecting rock layers or underground utilities before digging. [Mirel] made all of the hardware and software open-source for this project, and if you’d like to see another take on GPR then head over to this project which involves a lot of technical discussion on how it works. 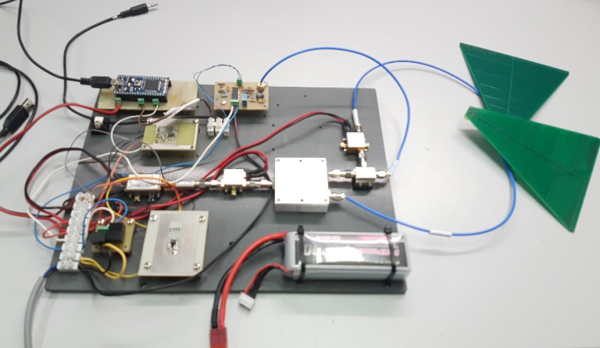 Radar is a useful tool with familiar uses such as detecting aircraft and observing weather. It also has some less known applications, such as a technology known as ground-penetrating radar (GPR). Despite the difficulty of sending and receiving radio waves through solid objects, with the right equipment it’s possible to build a radar that works underground as well.

GPR is used often for detecting underground utilities, but also has applications in other fields such as archaeology and geology. For those people in these fields, a less expensive GPR was the priority of a group presenting at a 2017 National Institute of Telecommunications of Poland conference (pdf warning). The presentation goes into specific detail on how to build a GPR for around €600, much less than commercial offerings.

The presentation begins by highlighting the basics of GPR, then details the hardware bill of materials for the transmitting circuit, receiving circuit, and the DC power supplies. It also details the theory behind the software needed to get the circuit running properly, and has code as well. The processing is done on a 32-bit Mbed platform, and the rest of the GPR is built with easy-to-source components as well.

It’s always good to see useful hardware projects that bring costs of traditionally expensive equipment down to the grasp of average people. Even traditional radar systems are now available for hundreds of dollars, and we’ve even seen attempts at other GPR systems before as well.

Thanks to [Stefan] for the tip!