Humans often like to monitor their exercise habits with the use of a pedometer, which tracks steps taken during a walk. Such devices are a little cumbersome for smaller creatures however, but no matter. Hamsters tend to get most of their workouts done on a wheel anyway, so it’s simple enough to instrument the equipment instead.

The build is a simple tachometer, using an infrared emitter and sensor pair to read the rotation speed of the hamster wheel. The wheel itself is light-colored plastic, so a strip of black felt is used to create a non-reflective section, creating a pulse one per revolution that can be read by the Adafruit Feather 32U4 running the show. Data on peak speed and total rotations is available for tracking the exercise habits of the hamster in question, output on a set of 14-segment displays.

It’s a fun project, and one that would be a great way to teach kids about pet care and basic embedded systems. Hamster performance could even be uploaded to the cloud with a more advanced build, and training milestones linked to rewards a la Premier League footballers. At the end of the day, a hamster wheel is just an exercise bike for our four-legged friends, and we’ve seen those hacked too. Video after the break.

END_OF_DOCUMENT_TOKEN_TO_BE_REPLACED

Even with all the hamster wheel trackers out there (and on this site) there’s room for improvement. [Bogdan] upgraded his hamster wheel from an Arduino and datalogging shield to an ESP32, and unleashed some new capabilities one does not ordinarily associate with hamster wheels.

[Bogdan]’s project logs distance in feet, duration of current session in time, RPM, overall revolutions, speed in MPH, and overall number of sessions, as well as a couple of system monitoring stats. It also tracks multiple wheels, as [Piontek] (the hamster) has two. However, thanks to the ESP32, [Bogdan]’s wheel tracker tweets its stats and updates a ThingSpeak dashboard with [Piontek]’s workouts.

In addition to its functionality, [Bogdan] made a point to make the project look and feel FINISHED. He designed custom 3D parts including a front plate, hooks for attaching the control box to the cage, and mounts for attaching the sensor to the wheel.

END_OF_DOCUMENT_TOKEN_TO_BE_REPLACED

[Michelle Leonhart] has two Roborovski hamsters (which, despite the name, are organic animals and not mechanical). She discovered that they seem to run on the hamster wheel all the time. A little Wikipedia research turned up an interesting factoid: This particular breed of hamster is among the most active and runs the equivalent of four human marathons a night. Of course, we always believe everything we read on Wikipedia, but not [Michelle]. She set out to determine if this was an accurate statement.

She had already added a ball bearing to the critters’ wheel to silence it by cannibalizing an old VCR. What she needed was the equivalent of a hamster pedometer. A Raspberry Pi and a Hall effect sensor did the trick. At least for the raw measurement. But it still left the question: how much distance is a hamster marathon?

[Michelle] went all scientific method on the question. She determined that an average human female’s stride is 2.2 feet which works out to 2400 strides per mile. A marathon is 26.2 miles (based on the distance Pheidippides supposedly ran to inform Athens of victory after the battle of Marathon). This still left the question of the length of a hamster’s stride. Surprisingly, there was no definitive answer, and [Michelle] proposed letting them run through ink and then tracking their footsteps. Luckily, [Zed Shaw] heard about her plan on Twitter and suggested pointing a webcam up through the plastic bottom of the cage along with a scale. That did the trick and [Michelle] measured her hamster’s stride at about 0.166 feet (see right).

Now it was a simple matter of math to determine that a hamster marathon is just under 10,500 steps. Logging the data to SQLite via ThingSpeak for a month led [Michelle] to the conclusion: her hamsters didn’t run 4 marathon’s worth of steps in a night. In fact, they never really got much over 2 marathons.

Does [Michelle] have lazy hamsters, or did she just add to our body of scientific knowledge about rodents? We don’t know. But we couldn’t help but admire her methods and her open source data logging code would probably be useful for some non-hamster activities.

If you are super competitive, you could use [Michelle’s] data to handicap yourself and challenge your pets to a race. But it would probably be cooler to build them their own Starship Trooper-style walkers. Either way, you can check out [Michelle’s] little marathon runners in the video below. 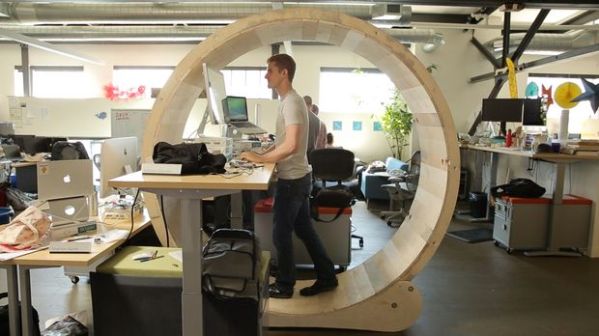 Numerous studies say standing desks are better for your health, and even more encourage people to walk for longer periods throughout the day. Why not turn your office-desk into a giant hamster-wheel to increase your productivity?

Ridiculous? Yes, but you have to admit — it looks pretty fun. [Robb Godshaw] is the mastermind behind this project, and he has a certain way with words too — this is what he has to say about his project:

Rise up, sedentary sentients, and unleash that untapped potential within by marching endlessly towards a brilliant future of focused work. Step forward into a world of infinite potential, bounded only by the smooth arcs of a wheel. Step forward into the Hamster Wheel Standing Desk that will usher in a new era of unprecedented productivity.

Hah. Regardless of possible productivity gains you might have in the office, it’s a hilariously fun project to do. It was designed in Autodesk Inventor, and the wooden arcs were manufactured using a water jet cutter. The materials list is pretty simple too: 4 sheets of 3/4″ plywood, 4 skateboard wheels, 2 pipes, 240 wood screws and a pint of glue is all that was required to build the wheel.