Standing desks are great conversation starters in the office – whether you like it or not. How do you know someone’s got a standing desk? Don’t worry, they’ll tell you. Standing desks have their benefits, but for maximum flexibility, many people choose a desk that can raise and lower depending on their needs. [Wassim] had just such a desk, but found pushing the buttons too 20th century for his tastes. Naturally, Google Assistant integration was the key here.

[Wassim] started out intending to capture and then spoof the desk controller’s signals to the motors, before realising it was likely easier to simply spoof button presses instead. This was achieved through a handful of NPN transistors and an Onion Omega2+ microcontroller board. Then it was a simple case of coding the controller to press the various buttons in response to HTTP requests received over WiFi. Google Assistant integration was then handled with IFTTT, though [Wassim] also discusses the possibility of implementing the full Smart Home API.

It’s entertaining to watch [Wassim] issue commands and have the desk slowly rise in response. Of course, there are other approaches, like this sneaky use of PVC to hack the office furniture. 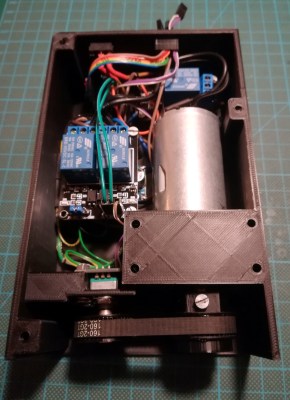 Standing desks are either the best thing since sliced bread, or the fastest way to make your legs tired and get you ridiculed by your coworkers in the bargain. This leads some folks to compromise and make standing desks that can be re-lowered to sitting height when you need to take a break. But now the distance from your desktop to the light source that illuminates it has changed. We can’t have that! 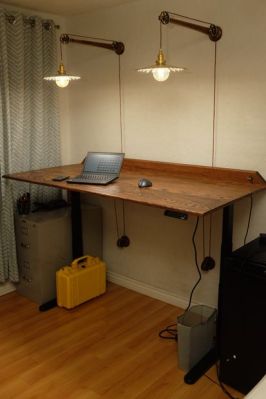 [John Culbertson] came up with a very elegant solution to the “problem”. He made lights that are suspended on pulleys that raise and lower with the desk itself. We’re not sure that you’re in the same situation he is, but we’re sure that you’ll agree that he did a nice job.

Besides the pulley mechanism, the light shades are a work of art. [John] clearly wanted a retro feel, so he used low-voltage lightbulbs, but augmented them with LED strips to pump out the lumens. All in all, there’s a tremendous attention to detail in the project, and it shows.

Disclaimer: your humble author is writing you this missive from a standing desk. Ours is just a regular desk put up on bricks — a temporary solution that’s become permanent. We’re always keeping our eyes out for mechanisms to make the desk convertible, but everything that we’ve seen is either overkill or ridiculously overpriced or both. It’s hard to beat 24 bricks at $0.35 apiece. Anyone have any suggestions?

Of course, with an adjustable desk come the problems of moving your lighting along with it, but [John] has solved that one for us.

Numerous studies say standing desks are better for your health, and even more encourage people to walk for longer periods throughout the day. Why not turn your office-desk into a giant hamster-wheel to increase your productivity?

Ridiculous? Yes, but you have to admit — it looks pretty fun. [Robb Godshaw] is the mastermind behind this project, and he has a certain way with words too — this is what he has to say about his project:

Rise up, sedentary sentients, and unleash that untapped potential within by marching endlessly towards a brilliant future of focused work. Step forward into a world of infinite potential, bounded only by the smooth arcs of a wheel. Step forward into the Hamster Wheel Standing Desk that will usher in a new era of unprecedented productivity.

Hah. Regardless of possible productivity gains you might have in the office, it’s a hilariously fun project to do. It was designed in Autodesk Inventor, and the wooden arcs were manufactured using a water jet cutter. The materials list is pretty simple too: 4 sheets of 3/4″ plywood, 4 skateboard wheels, 2 pipes, 240 wood screws and a pint of glue is all that was required to build the wheel.

END_OF_DOCUMENT_TOKEN_TO_BE_REPLACED

Standing desks seem to be all the rage today — but do you really want to commit fully to always standing? [Jeff Minton] didn’t, and when he found out how much convertible standing desks cost… he decided to make his own.

While brainstorming ways of accomplishing this he started browsing around eBay and found 18″ linear actuators for sale. They were $45 each, ran at 24V and could lift 600lbs each. Bingo. Actually, that’s kinda overkill…

He picked up a 24V power supply, an Arduino, and a 8-channel relay board.  The actuators are attached to the desk’s original legs using U-bolts which keep the legs straight and take the load of the desk. The untreated wood supports are there to reinforce the original desk, because they weren’t that sturdy in the first place.

It takes about a minute to fully actuate the legs, so while it’s not the prettiest nor the quickest solution — it does the trick and allows you to easily switch between standing and sitting.