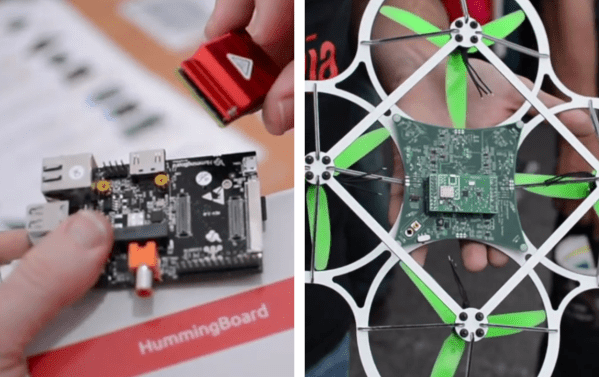 Freescale was very kind to Hackaday at Maker Faire this weekend, showing off a few boards and answering a few questions about why old Motorola application notes aren’t available on the Internet.

The Hummingboard from SolidRun comes in an oddly familiar form factor to anyone who has ever handled a Raspberry Pi. It also has an interesting feature: the CPU is on a small module, allowing anyone to upgrade the chipset to something significantly more powerful. In the top of the line configuration, it has a two core iMX6 CPU with a Gig of RAM, LVDS output, and Gigabit Ethernet. All the complex bits for this board are on a single module, allowing anyone to take the module and put it in another project, a la the Intel Edison.

Also in the Freescale booth was the pcDuino, a dual core ARM Cortex A7 with Ethernet, WiFi, and a SATA, with Arduino form factor pinouts. It’s a somewhat niche product, but being able to stack shields on something comparable to a Raspi or BeagleBone is a nice feature.

[Trey German] from Texas Instruments showed off some very cool stuff, including a quadcopter board for a Launchpad microcontroller. This isn’t a board with an IMU and a few servo outputs; this is the whole shebang with a frame, motors, and props. The frame was cut from some odd composite that’s usually used for road signs, and even though it wasn’t flying at the Faire (nothing was flying, by the way), it’s pretty light for a quad made at a board house.

Also from TI was their CC3200 dev board. This is a single chip with an ARM Cortex M4 and a WiFi radio that we’ve seen before. The CC3200 runs TI’s Wiring/Arduino inspired development environment Energia, and at about $30 for the CC3200 Launchpad board, it’s an easy and cheap way to build an Internet of Things thing. 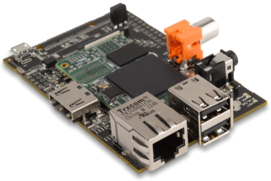 The Raspberry Pi has been around for a while now, and while many boards that hope to take the Pi’s place at the top of the single board ARM Linux food chain, not one has yet succeeded. Finally, there may be a true contender to the throne. It’s called the HummingBoard, and packs a surprising amount of power and connectivity into the same size and shape as the venerable Raspberry Pi.

The company behind the HummingBoard, SolidRun, hasn’t put a retail price on the board, nor have they set a launch date. You can, however, enter a contest to win a HummingBoard with the deadline this Friday. Winners will be announced in early May, so maybe the HummingBoard will be officially launched sometime around then.

It’s an amazing board with more than enough power to rival the extremely powerful BeagleBone Black, with the added bonus of being compatible with so many of those Raspberry Pi accessories we all love dearly.