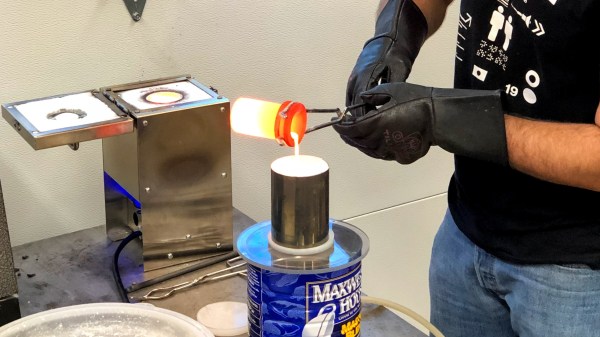 I’ve always thought that there are three things you can do with metal: cut it, bend it, and join it. Sure, I knew you could melt it, but that was always something that happened in big foundries- you design something and ship it off to be cast in some large angular building churning out smoke. After all, melting most metals is hard. Silver melts at 1,763 °F. Copper at 1,983 °F. Not only do you need to create an environment that can hit those temperatures, but you need to build it from materials that can withstand them.

Turns out, melting metal is not so bad. Surprisingly, I’ve found that the hardest part of the process for an engineer like myself at least, is creating the pattern to be replicated in metal. That part is pure art, but thankfully I learned that we can use technology to cheat a bit.

When I decided to take up casting earlier this year, I knew pretty much nothing about it. Before we dive into the details here, let’s go through a quick rundown to save you the first day I spent researching the process. At it’s core, here are the steps involved in lost wax, or investment, casting:

I had been kicking around the idea of trying this since last fall, but didn’t really know where to begin. There seemed to be a lot of equipment involved, and I’m no sculptor, so I knew that making patterns would be a challenge. I had heard that you could 3D-print wax patterns instead of carving them by hand, but the best machine for the job is an SLA printer which is prohibitively expensive, or so I thought. END_OF_DOCUMENT_TOKEN_TO_BE_REPLACED [Dan] wrote in to show off the delta-bot CNC mill which he and some buddies got up and running over the course of about two weeks. The team from Mad Fellows — a hackerspace in Prescott, Arizona — put their heads together and managed to build the thing from mostly parts-on-hand. Would you believe they’re only out-of-pocket about $100 in new materials?

After a bit of modeling work they started scavenging for parts, recovering most of the acrylic stock from dead LCD monitors. But there are many parts like the stepper motors, precision rods, bearings, belts, and pulleys that can’t or shouldn’t be salvaged in order to end up with a reasonably solid machine tool. We like [Dan’s] tip that the parts should be screwed together as gluing them would be problematic when it comes time to replace broken components.

You may be wondering about the strength of a delta-bot for milling. The purpose of the build is to make molds for investment casting. The lost-material (we don’t know if it’s wax or something else) is quite easy to machine and you can see in the clip after the jump that the mill does a great job. But they also did some tests on aluminum and apparently it’s not a problem.

The CNC version of HHH is over, so why are we posting this now? We messed up. [Dan] sent in a qualifying entry before the deadline and somehow we let it slip through the cracks. Sorry [Dan]! Better late than never — we’ll get a T-shirt in the mail right away.