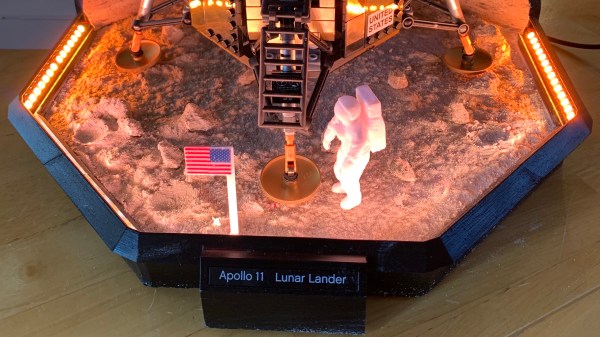 Retired scientist [Mark Howe] spent the last couple months making an animatronic movie featuring his LEGO lunar lander in a video recreation of the Apollo 11 moon landing (also embedded below). [Mark] is not only the producer, but serves as the technical director, set designer, and cameraman as well. He designed and 3D-printed a custom special effects stage for the scene. It gives motion to the LEM using stepper motors, timing belts, pulleys, and a linear guide rod, all hidden inside a discrete upstage tower. He simulates the Lunar regolith using grout, spray adhesive, and a smattering of small rocks.

[Mark] implements the special effects sequencer in an Arduino Nano, and provides sound effects using an Adafruit audio sound board which he loaded up with sound files from the real Apollo 11 landing. Floor strip lighting is provided by an array of Neopixels, and a back-lit Earth is lowered from the fly space for one cut. He made a custom PCB motherboard to hold the Arduino, sound card and motor drivers.

The resulting production is quite impressive. This isn’t [Mark]’s first attempt to relieve the double boredom of both retirement and coronavirus isolation — back in December he produced a similar animatronic movie recreating a Saturn V launch. Thanks to [jhookie55] for the tip.

END_OF_DOCUMENT_TOKEN_TO_BE_REPLACED 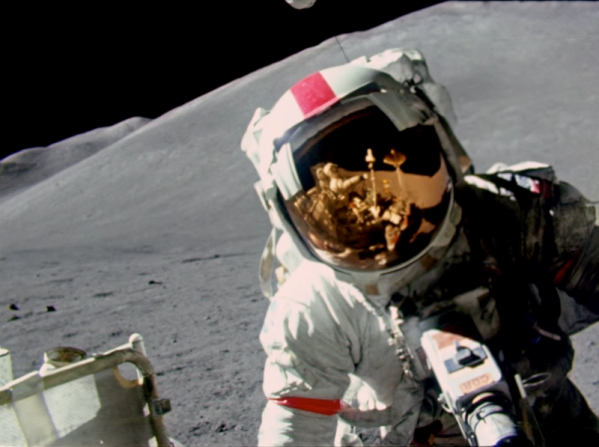 July 20th marked the anniversary of the first human setting foot on the moon. If you were alive back then, you probably remember being glued to the TV watching the high-tech images of Armstrong taking that first step. But if you go back and watch the video today, it doesn’t look the way you remember it. We’ve been spoiled by high-density video with incredible frame rates. [Dutchsteammachine] has taken a great deal of old NASA footage and used their tools to update them to higher frame rates that look a lot better, as you can see below.