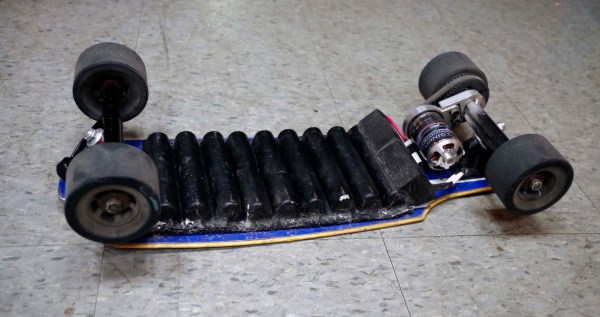 DIY electric longboards are a ton of fun to build and ride (we’ve featured several builds before). Most boards have batteries strapped to the bottom of a rigid board, or they have battery packs near each truck so the board can still flex. Instead of going with either of these designs, [Ben] created a custom battery pack design that’s able to flex with the board.

[Ben]’s pack is made up of A123 26650 cells nestled in his custom-fabricated enclosure. [Ben] designed his pack in CAD and used a CNC machine to create a foam mold. He used the mold to do a fiberglass layup, vacuum-bagged it, and left it to cure. Since the fiberglass bonded really well to the foam, [Ben] used acetone to dissolve the foam while leaving his fiberglass layup intact.

[Ben]’s pack fits 18 cells which he soldered together with some flexible copper grounding wire. The top side of the enclosure is covered with a layer of insulating rubber, and the rim is covered with a soft foam to form a gasket against the board. As you can see, the pack bends really well with the board, and  it doesn’t look like [Ben] has had any issues with his design so far. Check out [Ben]’s blog for more info and for more details on the overall design of his board. 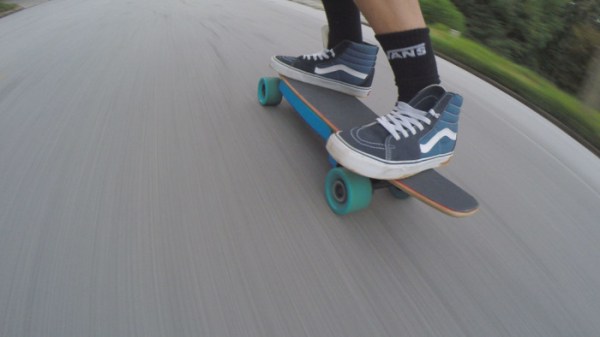 The Mini Maker Faire in Atlanta was packed with exciting builds and devices, but [Andrew’s] Electric Bubblegum Boards stood out from the rest, winning the Editor’s Choice Award. His boards first emerged on Endless Sphere earlier this summer, with the goal of hitting all the usual e-skateboard offerings of speed, range, and weight while dramatically cutting the cost of materials.

At just over 12 pounds, the boards are lightweight and fairly compact, but have enough LiFePO4’s fitted to the bottom to carry a rider 10 miles on a single charge. A Wii Nunchuck controls throttle, cruise control, and a “boost” setting for bursts of speed. The best feature of this e-skateboard, however, is the use of 3D-printed parts. The ABS components not only help facilitate the prototyping process, but also permit a range of customization options. Riders can reprint parts as necessary, or if they want to just change things up.

[Andrew’s] board is nearing the 11th hour over at his Kickstarter page, so swing by to see a production video made for potential backers, or stick around after the break for some quick progress and demo videos.

END_OF_DOCUMENT_TOKEN_TO_BE_REPLACED Everybody and their grandmother is longboarding electric-style these days: here are some of the most recent developments in the world of kickless cruising.

First up, [comsa42] has punched up an excellent step-by-step visual guide for first-time EV hopefuls, detailing the basics of a battery-powered longboard setup and thoroughly explaining the particulars behind component choices. His build is relatively straightforward: combine a board with a low(ish) kV outrunner motor, some LiPo batteries, an ESC (Electronic Speed Controller), a transmitter/receiver, and a few custom parts for gearing and mounting. This build should be commended not only for its simplicity but also for its frugality: [comsa42] estimates a final cost of around only $300, which is a staggering difference from commercial alternatives such as the Boosted Board and newcomer Marbel.

[comsa42’s] other significant contribution is a low-key and low-cost cover to house the electronics. He simply fiberglassed a small enclosure to protect the expensive internals, then mounted and painted it to blend seamlessly with the rest of the deck. You can find loads of other useful goodies in his guide, including CAD files for the motor mounts and for the wheel assembly.

But wait, there’s more! Stick around after the jump for a few other builds that ditch traditional wheels in favor of a smoother alternative. There’s also a smattering of videos, including comsa42’s] guide overview and some excellent cruising footage of the other board builds doing what they do best.

END_OF_DOCUMENT_TOKEN_TO_BE_REPLACED What were you building in your junior year of highschool? Well, for [Aaron Cofield], he built a motorized longboard.

He started with a plain longboard in the design he liked, gave it a nice paint coat (aesthetics over functionality people!) and then started looking into motorizing it. As it turns out there’s actually a pretty handy blog dedicated to converting longboards to electric. After many hours of research he settled on a 2400W RC prop motor and a 150A high performance RC car ESC unit. Who knew it was that simple!

A few metal brackets, some belts, sprockets, an idler and a whole ton of lithium-ion batteries later and the build is complete! He’s currently controlling it with an RC car remote, but had plans to control it using a Wii nunchuck and Arduino. The test runs this past summer got the board going about 20mph!

It looks done for now, but we’re sure he’s going to be continuing to refine it next summer — stick around after the break to see one of its first test drives!