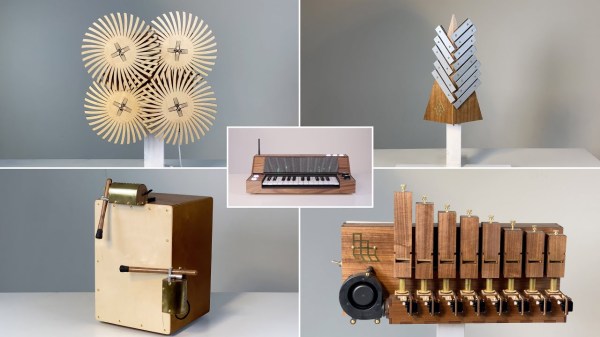 Music was created by humans, but often we find ourselves creating performances with machines. [Alana Balagot] and [Federico Tobon] did just that, constructing the stunning 4 Muses musical sculpture with their combined talents.

4 Muses is made up of four individual instruments, under the command of a single keyboard controller. The keyboard can be used to play the instruments live, or alternatively, can learn from the player or be used as a sequencer. It can also act as a simple device to play back music using the four instruments.

The pipe instrument uses servo-controlled valves, which allow air from a blower fan to reach several wood pipes. The xylophone instead uses solenoids to play its 13 tines. Percussion is provided by a mechanized cajón drum, using motors to actuate mallets that strike the various sections of the box. Meanwhile, hackers will be familiar with the concept of the motor-noise instrument, which drives stepper motors at different frequencies to generate tones.

Inside, a cavalcade of microcontrollers make everything work, from Arduino Megas and Teensys to NRF24s sending wireless packets from the controller to the instruments. [Alana] and [Federico] go in-depth with their documentation, highlighting the challenges they faced putting together the various instruments and showing how the final build came together.

Built with and brass hardware and sporting a variety of exquisite wood finishes, the final result is a quartet of machines that play beautiful music composed by [Alana] herself. Musical sculptures are often a great example of the artistry possible when putting electrons to work. Video after the break.