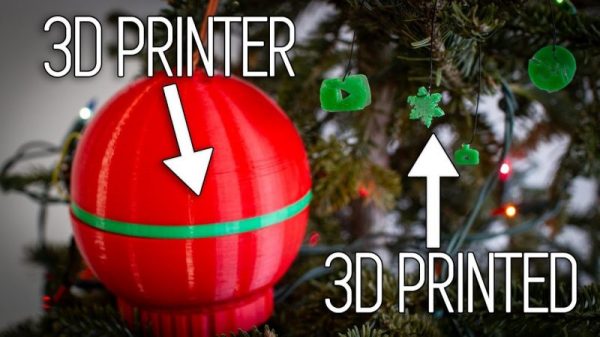 Sure there are the occasional functional Christmas tree ornaments; we had one that plugged into the lights and was supposed to sound like a bird gently trilling its song, but was in fact so eardrum-piercing that we were forbidden from using it. But in general, ornaments are just supposed to be for looks, right? Not so fast — this 3D-printed ornament has a 3D-printer inside that prints other ornaments. One day it might just be the must-have in functional Christmas decor.

Given that [Sean Hodgins] had only a few days to work on this tree-dwelling 3D-printer, the questionable print quality and tiny print volume can be overlooked. But the fact that he got this working at all is quite a feat. We were initially surprised that he chose to build a stereolithography (SLA) printer rather than the more common fused deposition modeling (FDM) printer, but it makes sense. SLA only requires movement in the Z-axis, provided in this case by the guts of an old DVD drive. The build platform moves in and out of a tiny resin tank, the base of which has a small LCD screen whose backlight has been replaced by a bunch of UV LEDs. A Feather M0 controls the build stage height and displays pre-sliced bitmaps on the LCD, curing the resin in the tank a slice at a time.

Results were mixed, with the tiny snowflake being the best of the bunch. For a rush job, though, and one that competed with collaborating on a package-theft deterring glitter-bomb, it’s pretty impressive. Here’s hoping that this turns into a full-sized SLA build like [Sean] promises.

END_OF_DOCUMENT_TOKEN_TO_BE_REPLACED

Last spring, the world saw something amazing. It was a device that would revolutionize the planet, save the world, and turn your smartphone into a 3D printer. Kickstarters aren’t known for selling themselves short. I speak, of course, of the OLO 3D printer, later renamed the ONO 3D printer, ostensibly because of a trademark dispute.

While filament-based 3D printers are extremely capable and slicing software is only getting better, resin-based printers are able to produce prints of nearly unparalleled quality. If you want high-resolution objects and fine detail, a resin printer is the way to go. These resin printers, however, are a bit more expensive than your traditional filament printers. A few hundred dollars will buy you a serviceable i3 clone, and less than a thousand will get you a real Prusa capable of printing in four colors. The premier desktop resin printer, the Form 2 from Form Labs, starts at $3500 USD.
END_OF_DOCUMENT_TOKEN_TO_BE_REPLACED