We’ve all gotten used to seeing movies depict people using night vision gear where everything appears as a shade of green. In reality the infrared image is monochrome, but since the human eye is very sensitive to green, the false-color is used to help the wearer distinguish the faintest glow possible. Now researchers from the University of California, Irvine have adapted night vision with artificial intelligence to produce correctly colored images in the dark. However, there is a catch, as the method might not be as general-purpose as you’d like.

Under normal illumination, white light has many colors mixed together. When light strikes something, it absorbs some colors and reflects others. So a pure red object reflects red and absorbs other colors. While some systems work by amplifying small amounts of light, those don’t work in total darkness. For that you need night vision gear that illuminates the scene with infrared light. Scientists reasoned that different objects might also absorb different kinds of infrared light. Training a system on what colors correspond to what absorption characteristics allows the computer to reconstruct the color of an image.

The only thing we found odd is that the training was on printed pictures of faces using a four-color ink process. So it seems like pointing the same camera in a dark room would give unpredictable results. That is, unless you had a huge database of absorption profiles. There’s a good chance, too, that there is overlap. For example, yellow paint from one company might look similar to blue paint from another company in IR, while the first company’s blue looks like something else. It is hard to imagine how you could compensate for things like that.

Still, it is an interesting idea and maybe it will lead to some other interesting night vision improvements. There could be a few niche applications, too, where you can train the system for the expected environment and the paper mentions a few of these.

Of course, if you have starlight, you can just use a very sensitive camera, but you still probably won’t get color. You can also build your own night vision gear without too much trouble. 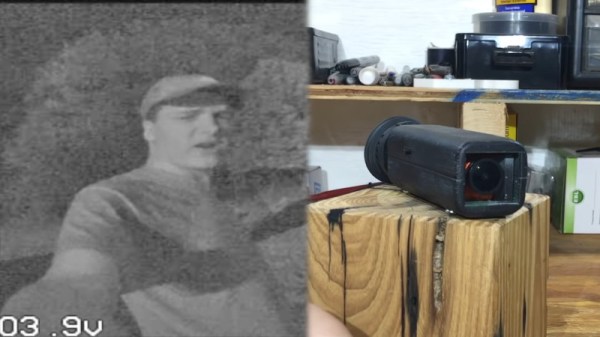 Traditional military-grade nightvision gear has a history stretching back to the Second World War, relying on photomultiplier tubes to help soldiers see in the dark. Such devices have trickled down to the civilian market in intervening years, however other simpler techniques can work too. [Happy_Mad_Scientist] whipped up a simple nightvision monocular using a very sensitive camera instead.

The camera in question is the Runcam Night Eagle 2, prized for its 0.00001 lux sensitivity. Black and white only, its capable of providing vision in moonlight and starlight conditions without external illumination. In this project, it’s hooked up to a monocle display designed for use with drone FPV setups. With lithium batteries and a charge circuit hooked up, and everything stuffed inside a compact 3D printed case, the final result is a portable, pocket sized night vision device for under $200 USD.

[Happy_Mad_Scientist] notes that in starlight conditions, it provides an advantage over other nighttime Airsoft players relying on IR illumination to see in the dark. We can imagine it would perform well in concert with a bright IR headlamp for those times when there’s simply no ambient light available – particularly indoors.

If your tastes are more military-spec, consider this teardown of a high-end Norweigan device. Video after the break.

END_OF_DOCUMENT_TOKEN_TO_BE_REPLACED

Ars Technica writes about three new toys coming out this year: a sub 100$ projector, tv game, and night vision goggles. The projector runs at standard TV resolution, takes standard composite in, and outputs an okay picture. The night vision goggles are monocular but focus both eyes on a single RGB LCD. The goggles uses an array of IR LEDs instead of amplifying ambient light to see in the dark. Lastly, they have a standalone implementation of the arcade game Big Game Hunters. The rifle uses a sensor bar to do the motion tracking and features a 32MB rom to hold the game files.