Today, you probably don’t think much about object-oriented programming, it’s just part of the landscape. But decades ago, it was strange and obscure technology. While there were several languages that led up to the current object-oriented tools we use today, one of the most influential was Xerox PARC’s Smalltalk language. [Michael Engel] took a C++ implementation of the Smalltalk VM, some byte code for a complete Smalltalk system, a Raspberry Pi “bare metal” library, and produced a Smalltalk workstation running on a bare Raspberry Pi — even a Pi Zero. The code is on GitHub and is admittedly a work in progress.

Smalltalk was interesting — and sometimes annoying — because everything was an object. Literally everything. The system took over the entire machine. It provided the GUI, the compiler, and the run time libraries. That’s probably why it was easy for [Michael] to forego the usual Linux OS for his project.

END_OF_DOCUMENT_TOKEN_TO_BE_REPLACED 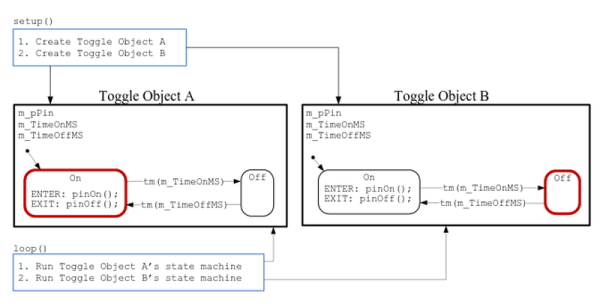 On a desktop computer, you think of an operating system as a big piece of complex software. For small systems (like an Arduino) you might want something a lot simpler. Object Oriented State Machine Operating System (OOSMOS) is a single-file and highly portable operating system, and it recently went open source.

OOSMOS has a unique approach because it is threadless, which makes it easy to use in memory constrained systems because there is no stack required for threads that don’t exist. The unit of execution is a C++ object (although you can use C) that contains a state machine.

You can read the API documentation online. Just remember that this is not an end user OS like Windows or Linux, but an operating environment for managing multiple tasks. You can, though, use OOSMOS under Windows or Linux as well as many other host systems.

END_OF_DOCUMENT_TOKEN_TO_BE_REPLACED

The Arduino IDE is extremely similar to C++, but judging from the sketches you can find on the Internet, you’d never know it. Simpler Arduino projects can make do with just toggling IO pins, reading values, and sending serial data between two points. More complex builds fall into the category of real software development, and this is where the standard Arduino IDE falls miserably short.

[Andy] saw this lack of proper libraries for more complicated pieces of software as a terrible situation and decided to do something about it. He ported the SGI Standard Template Library to bring all those fun algorithms and data structures to any AVR chip, including the Arduino.

Going over what’s included in [Andy]’s port reads just like a syllabus for an object-oriented programming class. Stacks, queues, and lists make the cut, as do strings and vectors. Also included is just about everything in the   and headers along with a few Arduino-oriented additions like a hardware serial and liquid crystal streams.

With all these objects floating around, [Andy] says it will make an impact on Flash and SRAM usage in an AVR. Still, with all the hullabaloo over faster and larger ARM micros, it’s nice to see the classic 8-bit microcontroller becoming a bit more refined.