[Viktor] just pulled out another one of his decades-old projects. This time around it’s a timer he built using 7400 logic chips. It was a great way for him to learn about electronics, and ended up serving as his alarm clock every morning.

Two pieces of copper clad board were cut to the same size. One of them was etched to act as the circuit board. The other was outfitted as a face plate. The same type of transfer sheets used to mask the traces of the circuit were also used to apply labels to the face plate. It was then coated with acrylic spray to protect it and stave off corrosion. The clock keeps time based on a half-wave rectified signal. The source is from a transformer which steps mains voltage down to a safe level for the 7805 regulator that supplies the clock’s power bus.

We’re glad [Viktor] has been showing off these old projects. We’ve also enjoyed seeing a TV sleep timer he built. If you’ve got something neat for yester-year why not dust it off, post the details, and send us a tip about it? We suppose the only thing more useless than a most useless machine is giving it an emoticon face. But that’s exactly what has happened with this project. But you’ll want to seen the whole thing, as the presentation involves much more than an angry box that can shut itself off.

This is the second iteration of the angry box. As we saw about 18 months ago, it will eventually get fed up with you turning the switch on and freak out by driving itself all over the desk. This version starts off with a rather pleasant face drawn on the red LED matrix which takes up the front side of the enclosure. It will nonchalantly flip the switch to the off position after first being activated. But if you insist on turning it back on things get angry rather quickly. This is shown in the video after the break. But if you can get past the horrible machine translation there are some build details to be had in this post.

END_OF_DOCUMENT_TOKEN_TO_BE_REPLACED The signs on the front door might be a little small, but the space which AssentWorks and Skullspace inhabit is anything but. [Matt] takes us on a tour of the Winnipeg, Canada makerspace and hackerspace.

The two spaces occupy one floor of the building but are partitioned for different purposes. AssentWorks, which is called a makerspace, is a business incubator. The tour shows it as a large and tidy area where small businesses can pool resources to maintain and stock the various shop and work areas. We can’t help but think of it as an OSB jungle as it seems all the interior walls have been built from Oriented Strand Board.

The second part of the video shows off the hackerspace: Skullspace. This is much less polished, but shows a lot of promise. There are several work spaces for electronics, machining, and woodworking. There is also an arcade room, a classroom, and a few other offerings. All in all there’s 8350 square feet of space between the two.

You can see the ten-minute tour embedded after the break. END_OF_DOCUMENT_TOKEN_TO_BE_REPLACED 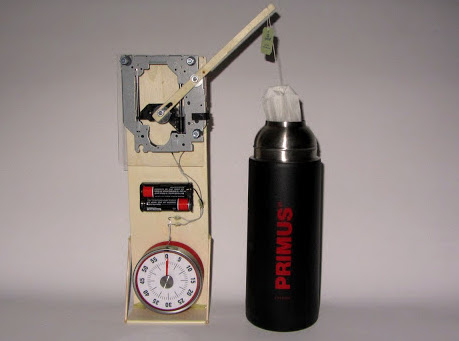 There are a couple of things that go into a great cup of tea. One is to have the water at the correct temperature, the other is to steep for just the right amount of time. This offering solves the latter by extracting the tea bag after a carefully timed steep.

It’s hard to imagine how this could be more simple. The timing mechanism is a cheap egg timer which has been modified to include a paperclip which moves with the minute hand. When the timer hits zero that paper clip contacts a stationary electrode, which powers the motor. That motor is the laser sled from a dead CD-ROM drive. Since these usually die because of the lens (not the mechanism) this is a great re-use of the internals. The sled zips to one side until it hits a limiting switch which kills the power. At the same time, this motion uses the wooden lever to extract the tea bag. All of this is explained in the clip after the jump.

Since the egg timer already has its own bell, you’ll even be alerted that it’s tea time!

END_OF_DOCUMENT_TOKEN_TO_BE_REPLACED

The quick and simple portal gun hack was published a little ver a week ago and has cleared almost 1.5 million views. This is just a taste of things to come as we plunge into creating more fun original content for hackaday. If you haven’t yet, you should go subscribe to our youtube channel.

We have many more exciting projects planned for the near future. Projects involving high voltage, lasers, and thermite! We could always use more ideas though. What projects would you like to see done? Think big, we want to remind people just how awesome hacking can be!

We now have access to some high speed cameras, a wonderful and professional gentleman named [Jay] who is an astounding video editor, and quite possibly the brightest readership in the universe. Let us know your ideas for awesome projects!

Whether inspired by the vaults of Fallout or the mysterious wrist device worn by [Turanga Leela], we’re just glad to see someone finally made a wrist-worn cellphone,

The Ultimate Wrist Watch, as the creator [Rob] calls it, is based on his Motorola Defy smart phone, tucked inside a neatly modified iPod wrist band meant to hold a runner’s music player. Simply mounting a cellphone to a wrist would be a bit awkward and a huge drain on battery life, so [Rob] wrote an app to automatically turn on the display when the accelerometer detects the phone is in the correct watch-reading position, and turns it off when [Rob] lowers his arm once again.

Right now the Ultimate Wrist Watch only stands in for the functions of a standard wrist watch – time, date, a chronometer and stopwatch are just about the only features implemented so far. Still, this is dangerously close to the wrist-mounted computers we’ve been promised for so long.