HackSpace magazine Vol. 16 is out, and there’s a few pages dedicated to Tindie from the person who runs it, our fabulous [Jasmine]. There’s some good tips in here for Tindie sellers — especially shipping — and a good introduction to what Tindie actually is. The three-second elevator pitch of, ‘Etsy but for DIY electronics’ is not in the feature, though.

Is it duct tape or duck tape? That’s a silly question, because it’s ‘duck’ tape, but that’s not important. Gaffer tape is superior. [Ross Lowell], the inventor of gaffer tape, passed away last week at the age of 92.

[Peter Stripol] has a hobby of building ultralights in his basement. Actually, he has a hangar now, so everything’s good. His first two planes flew as Part 103 ultralights, however, there were design problems. [Peter] is using an electric powerplant, with motors and batteries, which is much lighter than a gas-chugging Rotax. However, he was still basing his designs on traditional ultralights. His now third build will be slightly more trimmed down, probably a little bit faster, and might just use 3D-printed control surfaces. Check out the intro to the mk3 airplane here.

You’re only cool if you got chainz, so here’s some PCB chainz. This was done by [@jeffwurz] with OSHPark PCBs. The design, from as far as we can tell, is simple. It’s just a PCB without a soldermask, and a small cutout in one of the links. Assemble it into a chain, and if you’re clever, solder some resistor leads across the gap to make it a bit more solid.

ASMR, or officially, ‘autonomous sensory meridian response’, is the tingling sensation moving down your back induced by specific auditory (or visual) stimuli. That’s the scientific definition. On the Internet, it’s people breathing into microphones and smacking their lips. Yes, there are videos of this. Thousands of them. There are 11-year-old girls raking in the YouTube money posting ASMR videos. It’s weird and gross, and don’t get me started on slime videos. You’ve also got unboxing videos. The Raspberry Pi foundation found a way to combine ASMR with unboxing videos. I gotta respect the hustle here; ASMR and unboxing videos are some of the most popular content available, and the Pi foundation is not only combining the two, but doing so ironically. It’s exactly the content everyone wants to see, and it’ll bring in people who hate ASMR and unboxing videos. Someone over at the Pi foundation really knows what they’re doing here.

[Frank] is a guitar builder and has to make a quantity of acoustic guitar bridges that wouldn’t make sense to do manually by hand each time. He wanted a way of duplicating bridges quickly and precisely but he didn’t want to go to a CNC machine. Instead, he build a 3D duplicating machine.

The machine has 3 perpendicular axes, just like a milling machine. Mounted to the Z Axis is an air powered spindle that can reach 40,000 RPM. All 3 axes are moved by the operators hands. Normally, free-hand cutting something like this would be very difficult. [Frank’s] solved this in his machine by using a stylus that is offset from the cutting bit. The stylus is the same effective length and diameter of the cutting bit and is guided over a finished bridge pattern. While the stylus is tracing the pattern, the spindle and bit are removing material from a bridge blank. The stylus is continually moved over the entire pattern bridge until the spindle is finished carving out a new bridge out of the blank.

To aid in lifting the heavy Z Axis and spindle, [Frank] added a counter balance to make tracing the pattern extremely easy. Once the new bridge is carved, it only requires minor sanding to remove the tool marks before being installed on a guitar! [Frank] admits his linear bearings and rails are very rigid but also very expensive. If you’re interested in a less-expensive 3D duplicator, check out this project. 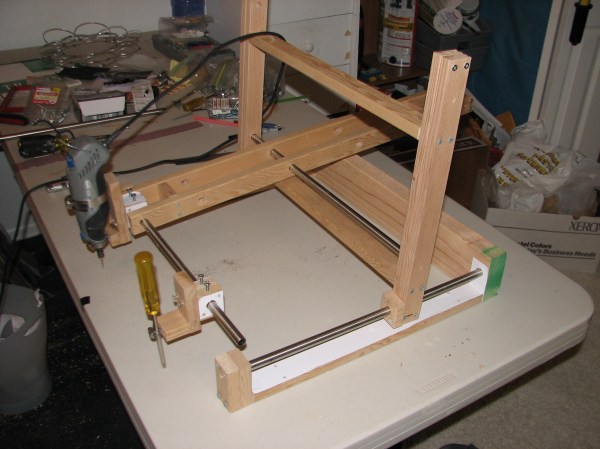 [Adran] wanted to be able to accurately cut out a bunch of the same parts out of wood but didn’t have the cash to spend on buying or building an automated CNC machine. After thinking about it for a while he decided to build a mechanical device that will allow him to duplicate objects by tracing them in 3 dimensions. This type of duplicator uses a stylus to trace over the surface of an object while the cutting tool is also moved over a piece of raw material, cutting as it goes. The end result is a newly carved object that is the same shape as the original. The idea is like a pantograph that works in 3 dimensions.

The wood frame is constructed to move freely front to back and left to right. To control the height of the cutting tool, in this case a Dremel, the frame pivots up and down and the X-axis rail. A screw driver is mounted off the side of the Dremel that acts as a stylus. It is mounted in the same orientation as the Dremel bit and is constrained such that it and the Dremel move in the same direction and amount at all times. When the tip of the screwdriver is traced over a 3D part, the Dremel moves the exact same amount carving a part out of a block of material.

Although the machine works, [Adran] admits there is some room for improvement. The left to right motion is a little choppy as the wood frame is riding directly on steel rails. He plans on adding linear bearings for the next revision to smooth things out.

Russians blowing up capacitors! As we all know, electronics only work because of blue smoke. [kreosan] is releasing this blue smoke from a few hundred caps. Fun times, even if they are a large number of inert tube shields in their collection of caps.

[mayhugh1] over on the home model engine machinist forum has built an 18 cylinder radial engine. It’s based on the Hodgson 9-cylinder radial engine that has been around for a while. The crank case is machined from a 5″ diameter rod of aluminum. There’s a Picassa album of the engine being constructed as well.

[Richard] wanted a Minecraft server, but not just any Minecraft server; this one demanded a custom case. A grass block was the inspiration, acrylic the medium, and a quad-core Mini-ITX the guts of the project.

Halloween was last Friday, and as always the tip line filled up with costume builds. [Leif] built a Ghostbusters costume complete with Muon trap, [Jeff] printed out some post-apocolyptic goggles, and [Green Gentleman] made a death-a-corn, although we’re struggling to figure out why the last one isn’t called an acorn-‘o-lantern.

[Matthias Wandel], a.k.a. the woodgears.ca dude,  is well-known in certain circles for being a wizard of wood. One of the first projects that put him on the map was a pantorouter – a router to cut mortises and tenons. He’s going back to his roots and building a bigger version. This version uses models of routers that are available outside North America, and in the latest video [Matthias] has it dialed in very well.

The Open Source Remote Control was an entry for The Hackaday Prize that didn’t make the final cut. It’s now an indiegogo project, and has some really cool tech we can’t wait to see in mainstream RC transmitters.