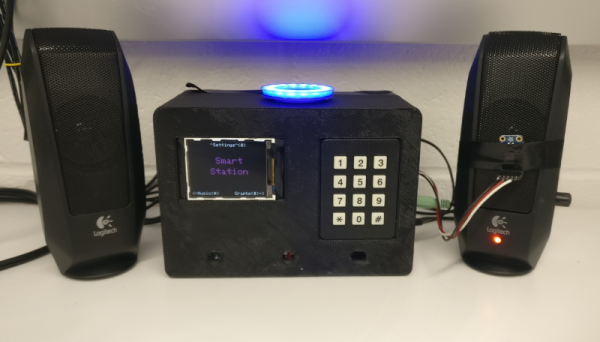 It’s that special time of year—time for the parade of student projects from [Bruce Land]’s embedded microcontroller design course at Cornell. [Timothy], [Dhruv], and [Shaurya] are all into remote sensing and control applications, so they built a smart station that combines audiovisual entertainment with environmental sensing.

As with the other projects in this course, the smart station is built on a PIC32 dev board. It does Bluetooth audio playback via RN-52 module and has a beat-matching light show in the form of a NeoPixel ring mounted atop the 3D-printed enclosure. But those blinkenlights aren’t just there to party. They also provide visual feedback about the environment, which comes from user-adjustable high and low trigger values for the mic, an accelerometer, a temperature and humidity sensor, and a luminosity sensor.

The group wanted to add an ultrasonic wake-up feature, but it refused to work with the 3.3V from the PIC. The NeoPixel ring wanted 5V too, but isn’t as picky. It looks to be plenty bright at 3.3V. Another challenge came from combining I²C, UART, analog inputs, and digital outputs. They had to go to the chip’s errata to verify it, but it’s there: whenever I²C1 is enabled, the first two analog pins are compromised, and there’s no official solution. The team got around it by using a single analog pin and a multiplexer. You can check out those blinkenlights after the break.

END_OF_DOCUMENT_TOKEN_TO_BE_REPLACED 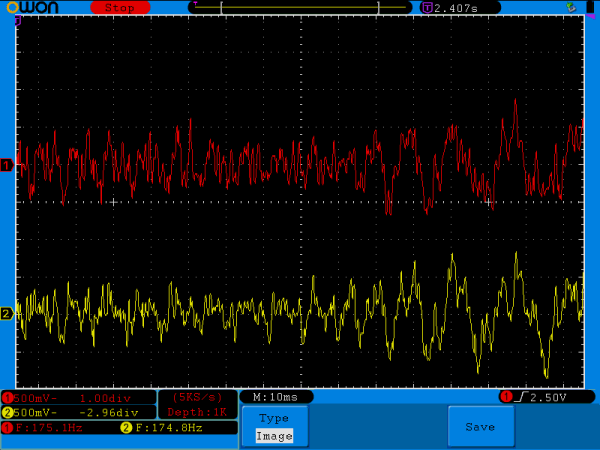 The PIC microcontrollers are powerful little devices, and [Tahmid] is certainly pushing the envelope of what these integrated circuits can do. He has built (for educational purposes, he notes) an audio player based on a PIC32 and a microSD card. Oh, and this microcontroller-based audio player can play in stereo, too.

The core of the project is a PIC32MX250F128B microcontroller. 16-bit 44.1kHz WAV files are stored on the microSD card and playback is an impressive 12-bit stereo audio. It can also play back 8-bit files (with some difficulty). [Tahmid] programmed the interface to work through the serial port and it is very minimalistic, mostly because this was a project for him to explore audio on a microcontroller and wasn’t to build an actual stand-alone audio player that he would use from day to day.

Still, even though the project isn’t ready to replace your iPod, the core audio-processing parts are already done if you want to try to build on [Tahmid]’s extensive work. You could even build a standalone audio player like this but have it play high-quality 12-bit stereo audio!