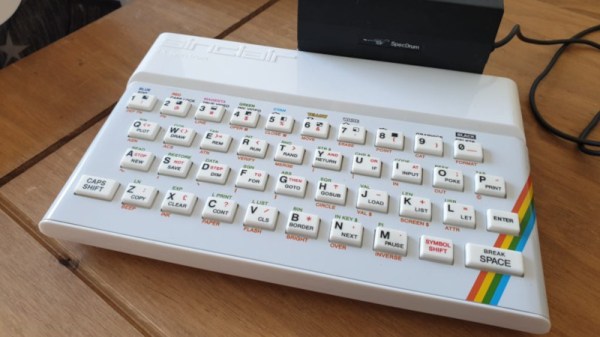 The Sinclair ZX Spectrum was a popular computer in the 8-bit era, and particularly so in its homeland of the United Kingdom. It was known more for its low cost than its capabilities, but it gained many add-ons over the years. One of those was the Cheetah SpecDrum, which turned the Spectrum into a rudimentary drum machine. [PianoMatt] wasn’t happy with the original drum samples, so he set about loading a custom kit into the SpecDrum.

The SpecDrum software initially came with extra sample tapes, so [PianoMatt] knew it was an achievable task to load in custom samples. Starting by loading the software in an emulator, the RAM was then exported as raw data and loaded up in Audacity. After some experimentation, it was determined the samples were stored in 8-bit format at a sample rate of approximately 20 kHz. With this figured out, it was then possible to load replacement samples directly into RAM through the emulator.

However, this wasn’t enough for [PianoMatt]. Further digging enabled him to reverse engineer the format of the replacement sample tapes. Armed with this knowledge, [PianoMatt] then generated his own tape, complete with proper headers and labels for each drum sound.

It’s a tidy effort to bring a more modern sound to a now positively ancient piece of hardware. We’d love to hear a track with drums courtesy of the SpecDrum, so we’ll keep an ear out on Soundcloud. Mucking around with old sound hardware is a popular pastime in these parts – we’ve even seen people go so far as to build bespoke Sega chiptune players from scratch.

There are times when you set out to do one thing, and though you do not achieve your aim you succeed in making something else that’s just a bit special. [TheKhakinator] sent us something he described as a fail, but even though we’re posting it as one of our Fail Of The Week series we think the result still has something of the win about it. It may not be the amazing hack he hoped it would become, but that really does not matter in this case.

On his travels in China his attention was caught by an everyday electronic gadget, an electronic calculator  that speaks the numbers and operations in Chinese as you use it. He bought a few of them, hoping that when he got them back to his bench he’d find an EEPROM containing the samples, which he could replace with his own for a cheap but low bitrate sampler.

Sadly this neat hack was not to be, for when he tore the surprisingly well-built calculators down he found only an epoxy blob concealing a single chip. All was not lost though, for while investigating the device’s features he discovered that as well as speaking Chinese numbers and operands it also had a selection of alarm tunes built-in, plus a mode in which it operated as a rudimentary electronic organ. He leaves us with a couple of videos we’ve posted below the break, first his teardown, and then a virtual orchestra of calculators playing dance music as he forgets the fail and concentrates on the win.

END_OF_DOCUMENT_TOKEN_TO_BE_REPLACED

Once tried, even grown-ups just can’t let go of that hilariously funny Chewbacca mask. Also, the speaking toy literally cries out to be hacked. Weary of the whining Wookie, [John Park] set out to bring variety into Chewie’s mode of expression, expanding the mask’s memory and vocabulary to unprecedented levels.