Servo testers are useful devices to have on hand, allowing one to quickly check a given part for proper operation. However, cheaper models can be quite limited, and may not output signals suitable for testing the full range of servos out there. [Buttim] had a few testers laying around, and wanted to see if they could be modified to do more.

Initial experiments with the cheapest model on hand came to naught, revealing nothing but a small IC with its markings scrubbed off. However, going a few more dollars upmarket, [buttim] found a servo tester packing a Nuvoton N75E003. An unfamiliar name to the hobbyist, Nuvoton microcontrollers are often found in mass-production designs due to their low cost.

The N75E003 is a 8051-based device, and [buttim] was able to source a programmer and tutorial resources on how to work with the chip. Armed with the right hardware and knowledge, the servo tester was first programmed with a basic blink sketch. With everything confirmed to be working as expected, [buttim] set about programming a custom firmware for the servo tester that would output a broader range of PWM signals to suit their needs.

It’s a great example of the learning possibilities available by simply cracking open the case of commodity hardware and diving in. Of course, if you need something even more capable, you can always build your own from scratch! 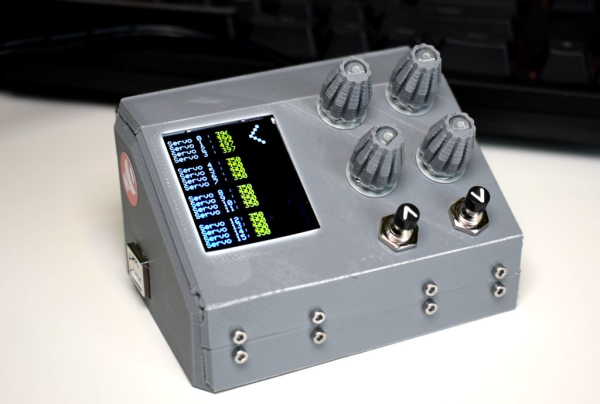 You know how it goes — sometimes you just have to stop in the middle of a project and build yourself a tool that vastly improves your workflow as soon as it’s completed. [Ikkalebob] aka [Will Cogley] on YouTube is working on some super secret project that requires a whole bunch of servos. And since all of them have to be tested and set, he built this adorable servo tester as a time-saving gift to himself.

This tester revolves around an Adafruit 16-channel servo driver and an Arduino Uno. The servos show up on the screen in groups of four, and can be tested four at a time with the pots. The buttons let [Ikkalebob] move up and down between the groups. The SainSmart LCD proved to be more difficult to set up than others, but [Ikkalebob] did you a solid and tweaked the library. It’s available along with his code and STLs.

Speaking of STLs, we really dig the mini NASA console look and the folding enclosure. Leveraging the print process to build hinges and other things is awesome, and so is getting away with using fewer fasteners. You can see a bit of how [Ikkalebob] designed it in the video after the break.

Depending on what you’re doing with servos, you might want a different kind of testing suite. Here’s one that’s geared toward RC pilots.

END_OF_DOCUMENT_TOKEN_TO_BE_REPLACED They say necessity is the mother of invention. Sometimes the necessity is simply avoidance of unpleasant tasks such as cutting down 3500 header pins by hand. [Nixieguy] and his coworkers were faced with 50 prototype boards bearing 70 overly long pins apiece. He saved them from cutting them all down by hand by making a tiny improvised circular saw/grinder.

[Nixieguy] started by laser-cutting a combination tool holder and grinding platform. His laser failed before he could fashion a guard to keep the pin bits out of the motor or cut all the pieces he had in mind. The grinder is made from a 10A brushless RC motor, a motor driver, and a servo tester. [Nixieguy] machined an adapter to connect the disc to the shaft.

The transformer is there to hold the thing down during use since it’s so lightweight. He’s wearing two pairs of gloves because the pin cuttings were hot enough to sear skin. [Nixieguy] is planning on a complete redesign including a motor guard and the ability to adjust the depth. Maybe he can turn it into a chainsaw, maybe not.