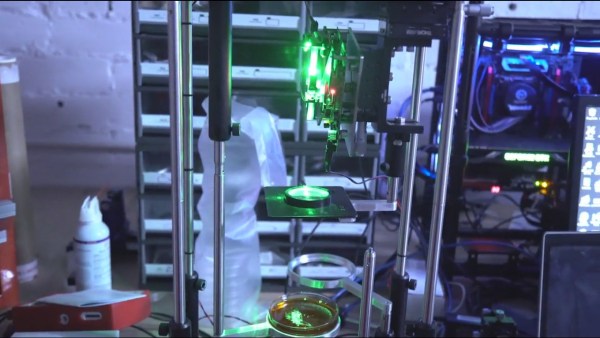 It’s the year 2260 and you’re being beamed from your starship to the planet below. Being a descendant of present day 3D printers, the transporter prints you out, slowly making one layer before moving on to the next, going from the ground up. The you-that-was hopes nothing spills out before you’re done. But what if you could print every atom in your body at the same time? If those transporters are descendant’s of Daqri’s holographic 3D printing technology then that’s just what will happen.

Daqri’s process is akin to SLA (stereolithography) and SLA/DLP (digital light processing). In SLA, a laser beam is shone onto a pool of resin, hardening the resin at the beam’s point. The laser scans across the resin’s surface, drawing one layer. More resin is added and then the next layer is drawn. In SLA/DLP, the light for an entire layer is projected onto the surface at once. While both methods involve stereolithography, the acronym SLA by itself is commonly used to refer to the laser approach.

Daqri’s process however, uses a holographic chip of their own making to project the light for all the layers at the same time into the material, a light-activated monomer. Their chip is a silicon wafer containing a grid of tunable crystals. Those crystals control the magnitude and phase of light reflected down into the monomer, creating a 3D volume of interference patterns. The brief description of the process says that a laser is used to shine light onto the crystals, so there’s probably still some scanning going on. However, in the video, all of the object being printed appears illuminated at the same time so the scanning is likely very fast, similar to how a laser in a light show seemingly paints what appears to be a 2D shape on the side of a building, even though it’s really just a rapidly moving point. There’s also the possibility that the beam’s point is large enough to encapsulate all of the chip at once. You can see a demonstration of it in the video below.

END_OF_DOCUMENT_TOKEN_TO_BE_REPLACED 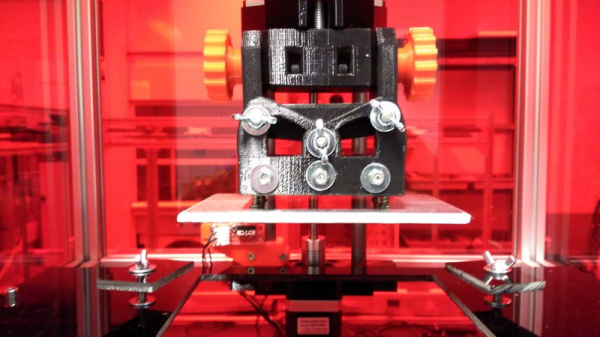 [Aldric Negrier] is no stranger to the 3D printing world. Having built a few already, he designed and built an SLA/DLP 3D printer, named RooBee One, sharing the plans on Instructables. He also published tons of other stuff, like a 3D Printed Syringe Pump Rack and a 3D Scanning Rig And DIY Turntable. It’s really worth while going through his whole Instructables repository.

This open-source 3D printer was inspired by the Cristelia – SLA/LCD 3d printer and the Vulcanus MAX 3D printer (that he designed). RooBee One has an aluminium frame and an adjustable print area of 80x60x200 mm, with up to 150x105x200mm build volume using an ACER DLP projector. In addition, a fan on top of the printer was added to extract the toxic vapours outside and away from the printer operator. The electronics are based on the Arduino MEGA with the RAMPS 1.4 shield and one NEMA 17 stepper motor. As for the Arduino Mega firmware, [Aldric] choose to use Repetier, which he usually uses in his other printers.

The SLA resin he used is the Standard Blend Resin from Fun to Do Resins. These resins tend to release toxic airborne particles, so extra care should be taken to ventilate the area while printing and also do a proper cleaning afterwards.

You can get a glimpse of the printer making a small gear come to life in the following video: