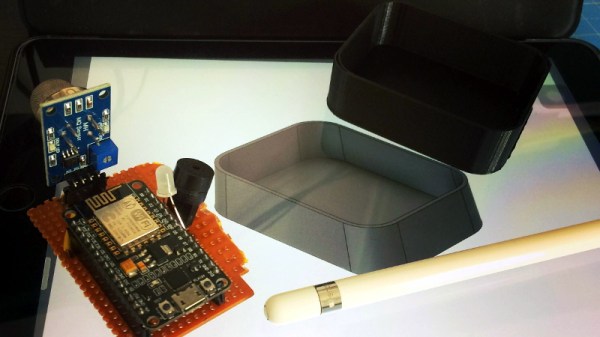 The modern hacker wields a number of tools that operate on the principle of heating things up to extremely high temperatures, so a smoke alarm is really a must-have piece of equipment. But in an era where it seems everything is getting smarter, some might wonder if even our safety gear could benefit from joining the Internet of Things. Interested in taking a crack at improving the classic smoke alarm, [Vivek Gupta] grabbed a NodeMCU and started writing some code.

Now before you jump down to the comments and start smashing that keyboard, let’s make our position on this abundantly clear. Do not try to build your own smoke alarm. Seriously. It takes a special kind of fool to trust their home and potentially their life to a $5 development board and some Arduino source code they copied and pasted from the Internet. That said, as a purely academic exercise it’s certainly worth examining how modern Internet-enabled microcontrollers can be used to add useful features to even the most mundane of household devices.

In this case, [Vivek] is experimenting with the idea of a smoke alarm that can be silenced through your home automation system in the event of a false alarm. He’s using Google Assistant and IFTTT, but the code could be adapted to whatever method you’re using internally to get all your gadgets on the same virtual page. On the hardware side of things, the test system is simply a NodeMCU connected to a buzzer and a MQ2 gas sensor.

So how does it work? If the detector goes off while [Vivek] is cooking, he can tell Google Assistant that he’s cooking and it’s a false alarm. That silences the buzzer, but not before the system responds with a message questioning his skills in the kitchen. It’s a simple quality of life improvement and it’s certainly not hard to imagine how the idea could be expanded upon to notify you of a possible situation even when you’re out of the home.

We’ve seen how a series of small problems can cascade into a life-threatening situation. If you’re going to perform similar experiments, make sure you’ve got a “dumb” smoke alarm as a backup.

END_OF_DOCUMENT_TOKEN_TO_BE_REPLACED 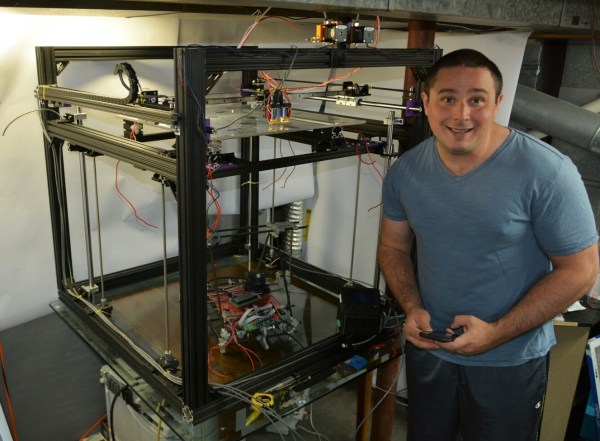 When we wrote about [Dan Beaven]’s resin printer a while back he enthusiastically ensured us that, thanks to the recent wave of attention, he would finally finish the project. That’s why today we are covering his entirely unrelated 2 cubic foot print volume FDM printer.

As we mentioned, [Dan] is no stranger to 3D printers. His addiction has progressed so far that he needs bigger and bigger parts, but when he looked at the price of printers that could sate his thirst… it wasn’t good. We assume this is the time he decided to leverage his resin printer procrastination to build a massive printer for himself.

The frame is aluminum extrusion. The bed is an 1/4″ thick aluminum plate supported just a little bit in from each corner. He can use the 4 motors to level the platform, which is a killer feature on a machine this big. More or less it’s fairly standard mechanically.

We are interested in his interesting addition of a FLIR thermal sensor to see live heat distribution. We also applaud him on his redundant safety systems (such as a smoke sensor that’s separately powered from the machine).

All the files are available on his site if you’re procrastinating on something and would like one for yourself.