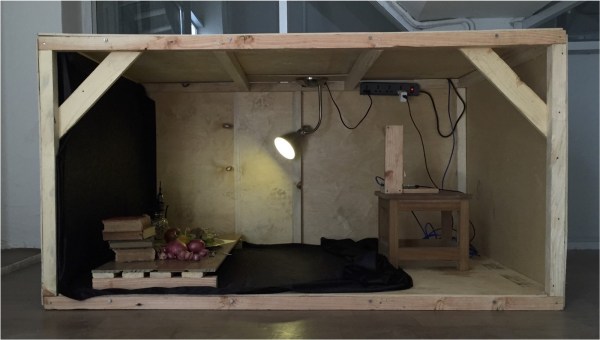 Here’s a project that brings together artist [Justus Bruns] and engineers [Rishi Bhatnagar] and [Michel Jansen] to collaborate on an interactive work of Art. The Live Still Life is a classic still life, streamed live from India to anywhere in the world. It is the first step towards the creation of an art factory, where hundreds of these works will be made, preserved and streamed.

The Live Still Life is a physical composition of fresh fruit and vegetables displayed on a table with flatware, cutlery and other still objects. This is located in a wooden box in Bangalore. Every minute a photo is taken and the image is streamed, live, accessible instantly from anywhere in the world. Les Oiseaux de Merde’s Indian curator is on call to replace the fruit the minute it starts to rot so as to maintain the integrity of the image. In this way, while the image remains the same, the fight against decay is always present. The live stream can be viewed at this link.

The hardware is quite minimal. An internet connected Raspberry Pi model B,  Raspberry Pi camera module, a desk lamp for illumination and a wooden enclosure to house it all including the artwork. Getting the camera to work was just a few lines of code in Python. Live streaming the camera pictures took quite a bit more work than they expected. The server was written using a module called Exprestify written on top of Express JS to facilitate easier RESTful functions. For something that looks straightforward, the team had to overcome several coding challenges, so if you’d like to dig in to the code, some of it is hosted on Github or you can ask [Rishi] since he still needs to clean it up quite a bit. This game of Space Invaders is played by tilting your iPhone to the left or right. It’s a demonstration of HTML5 used to link devices in-browser. The only setup that’s required is for the base device to load up a webpage, then the control device scans a QR code (or just types in a link) to connect with the game. You can give it a try right now if you want.

It only works with iOS devices but we believe that’s because mobile Safari has the ability to poll accelerometer data and other browsers do not. If this was using on-screen buttons rather than the tilt controls it would work on any device that implements HTML5. The connection is facilitated by Node.js and Socket.IO. The QR code that is generated by the host machine’s page includes a unique ID which allows the control device to link with it. Once loaded, commands from the controller are sent via Socket.IO to the node on the host machine.

As with this HTML5-based sensor data application, we think this method is important because it allows control without the need for a standalone application. We’re hoping to see a lot of this in embedded projects in the future. By serving data to a smart phone or other device you remove to need for a physical user interface in your projects, which means you can make great things while spending less.