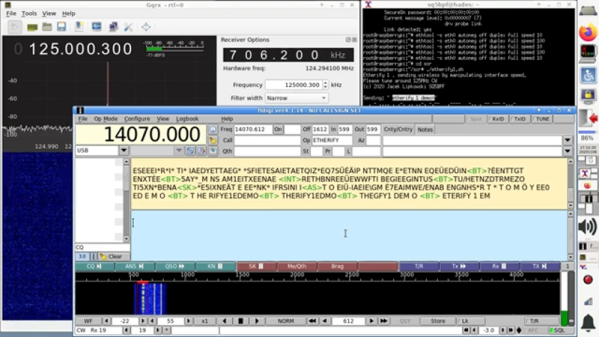 Since the ether is an old term for the fictitious space where radio waves propagate, we always thought it was strange that the term ethernet refers to wired communication. Sure, there are wireless devices, but that’s not really ethernet. [Jacek] had the same thought, but decided to do something about it.

What he did is use two different techniques to alter the electromagnetic emission from an ethernet adapter on a Raspberry Pi. The different conditions send Morse code that you can receive at 125 MHz with a suitable receiver.

Practical? Hardly, unless you are looking to exfiltrate data from an air-gapped machine, perhaps. But it does have a certain cool factor. The first method switches the adapter between 10 Mbps and 100 Mbps. The second technique uses a stream of data to accomplish the modulation. The switching method had a range of around 100 meters while the data-based method topped out at about 30 meters. The code is on GitHub if you want to replicate the experiment.

There is plenty of precedent for this sort of thing. In 1976 Dr. Dobb’s Journal published an article about playing music on an Altair 8800 by running code while an AM radio was nearby. We’ve seen VGA adapters forced to transmit data, too.