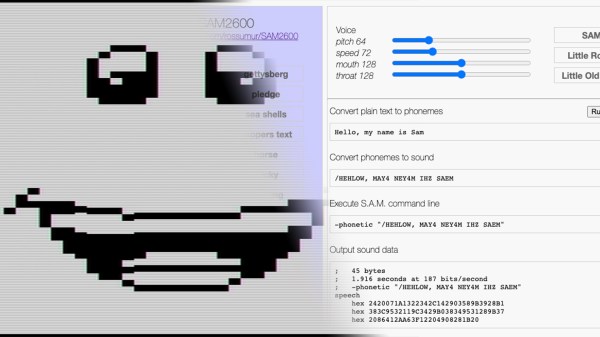 Back in the early 1980s, there was a certain fad in making your computer produce something resembling human speech. There were several hardware solutions to this, adding voices to everything from automated telephone systems to video game consoles, all the way to Steve Jobs using the gimmick to introduce Macintosh to the world in 1984. In 1982, a software-based version of this synthesis was released for the Atari 8-bit line of computers, and ever since them [rossumur] has wondered whether or not it could run on the very constrained 2600.

Fast-forward 38 years and he found out that the answer was that yes, it was indeed possible to port a semblance of the original 1982 Software Automatic Mouth (or SAM) to run entirely on the Atari 2600, without any additional hardware. To be able to fit such a seemingly complicated piece of software into the paltry 128 bytes (yes, bytes) of RAM, [rossumur] actually uses an authoring tool in order to pre-calculate the allophones, and store only those in the ROM. This way, the 2600 alone can’t convert text to phonemes, but there’s enough space left for the allophones, which are converted into sound, that about two minutes of speech can fit into one cartridge. As for why he went through the trouble, we quote the author himself: “Because creating digital swears with 1982 speech synthesis technology on a 1977 game console is exactly what we need right now.”

For this project, [rossumur] has written an incredibly interesting article on speech synthesis in order to explain the SAM engine used here. And this isn’t his first time on the website either, always cramming software where it shouldn’t fit, such as a “Netflix”-like streaming service, or 8-bit console emulators, both on nothing but an ESP32 microcontroller. Check this one out in action after the break.

END_OF_DOCUMENT_TOKEN_TO_BE_REPLACED 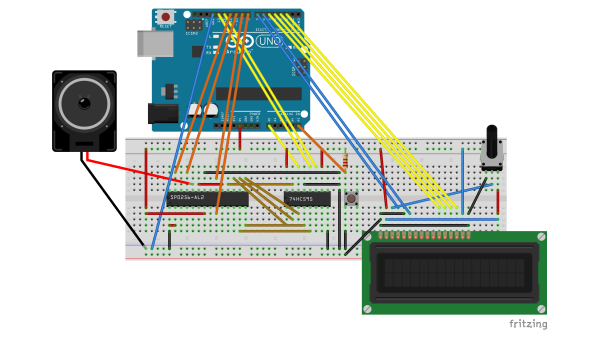 It isn’t easy communicating when you have any form of speech impairment. In such cases, a Speech-generating device (SGD) becomes essential to help you talk to the world. When coupled with other ailments that limit body movement, the problem becomes worse. How do you type on a keyboard when you can’t move your hands, and how do you talk when your voice box doesn’t work. Well known Scientist Stephen Hawking has been battling this since 1985. Back then, it took a lot of hardware to build a text entry interface and a text to speech device allowing him to communicate.

But [Marquis de Geek] did a quick hack using just a few parts to make a Voice Box that sounds like Stephen Hawking. Using an arcade push button to act as a single button keyboard, an Arduino, a 74HC595 shift register, a 2-line LCD, and the SP0256 hooked to an audio amplifier / speaker, he built the stand-alone speech synthesizer which sounds just like the voice box that  Stephen Hawking uses. Although Dr. Hawking’s speech hardware is quite complex, [Marquis de Geek]’s hack shows that it’s possible to have similar results using off the shelf parts for a low cost solution.

There aren’t a lot of those SP0256-AL2 chips around. We found just a couple of retailers with small stock levels, so if you want to make one of these voice boxes, better grab those chips while they last. The character entry is not quick, requiring several button presses to get to the character you want to select. But it makes things easier for someone who cannot move their hands or use all fingers. A lot of kids grew up using Speak and Spell, but the hardware inside that box wasn’t the easiest to hack into. For a demo of [Marquis de Geek]’s homemade Hawking voice box, check the video below.