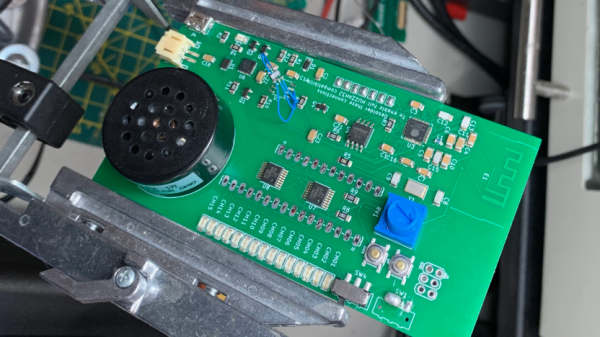 [Nick Price] had a wonderful concept for a DEFCON badge: a device that worked a lot like a directional Geiger counter, but chirped at detecting WiFi deauthentication packets instead of radiation. That’s a wild idea and it somehow slipped past us last year. Why detect such a thing? Well, the WiFi deauth attack is a kind of invisible toxicity, effectively jamming wireless communications by forcing users to be constantly tied up with authentication, and this device would detect it.

A few things were harder than expected, however. To make the device directional, [Nick] designed and built a PCB Yagi antenna but it wasn’t practical. Not only was it far too big, it would also have required going to four layers on a PCB that was already expensive. The solution he settled on — inspired by a friend’s joke about just dropping the badge into a Pringles can — was to surround the PCB omni antenna with a copper pipe end cap from the plumbing section of any hardware store. [Nick] figured that soldering that to the ground plane should result in a simple, cheap, and attractive directional antenna mod. Did it work? We’ll all have to wait and see.

Sadly, [Nick] wasn’t able to finish in time for last year’s DEFCON. Hardware revisions mounted, and fabrication times for his specialized PCB were longer than usual. Worse news is that this year’s is cancelled, or rather is going virtual, which means he’s going to have to deauth himself. The good news is that now he’s got another 12-month extension. Watch the brief video of the functional prototype, embedded below.