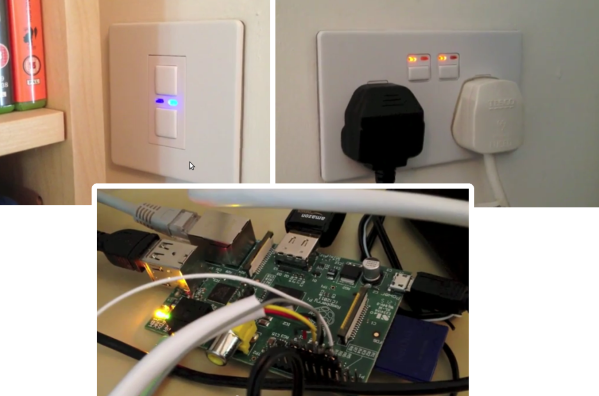 It’s not quite artificial intelligence, but saying “Jeeves, lights!” will switch on the bulbs in the room. [Chipos81] built the voice-activated home automation around a Rapsberry Pi board with LightwaveRF devices switching lights and outlets.

The LightwaveRF system offers a WiFi link which provides Internet connectivity for all of those devices in your house. This makes it a snap for [Chipos81] to control them from the RPi. To provide speech recognition he’s using CMU Sphinx. It’s an open source speech recognition library developed by researchers at Carnegie Mellon University and released under a BSD license. It seems to do a great job in the video of quickly parsing several sets of commands.

“Jeeves” will even talk back to you to confirm a command. This is generated by Festival, a package developed by the University of Edinburgh.  This provides some entertainment in the last seconds of the video as we detect a distinct Scottish accent when it says “See you tomorrow”.

The GPIO pins provide a bit of feedback, using three colored LEDs to let you know what is going on with the system. There’s even an IR LED used to add voice control to your Television.

END_OF_DOCUMENT_TOKEN_TO_BE_REPLACED