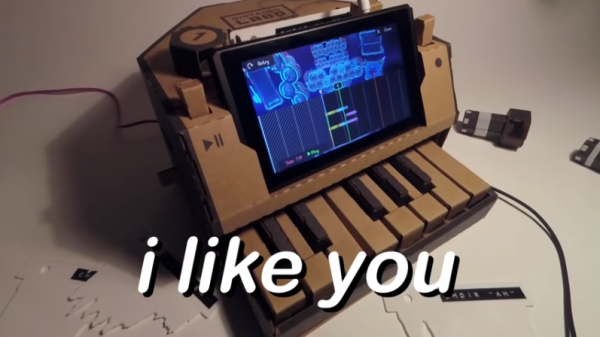 [Hunter Irving] has been busy with the Nintendo LABO’s piano for the Nintendo Switch. In particular he’s been very busy creating his own custom waveform cards, which greatly expands the capabilities of the hackable cardboard contraption. If this sounds familiar, it’s because we covered his original method of creating 3D printed waveform cards that are compatible with the piano, but he’s taken his work further since then. Not only has he created new and more complex cards by sampling instruments from Super Nintendo games, he’s even experimented with cards based on vowel sounds in an effort to see just how far things can go. By layering the right vowel sounds just so, he was able to make the (barely identifiable) phrases I-LIKE-YOU, YOU-LIKE-ME, and LET’S-A-GO.

Those three phrases make up the (vaguely recognizable) lyrics of a song he composed using his custom waveform cards for the Nintendo LABO’s piano, appropriately titled I Like You. The song is at the 6:26 mark in the video embedded below, but the whole video is worth a watch to catch up on [Hunter]’s work. The song is also hosted on soundcloud.