[Markus] is attending the Royal Institute of Technology in Stockholm. For his Advanced Prototyping class he had to make something using rapid prototyping technology — i.e. 3D printers, laser cutters, and breadboards. He chose to make a fantastic looking clock.

He started by designing the entire thing in CAD. The base is 3D printed on a Ultimaker. The world clock display is a piece of laser engraved acrylic which he heated up and curved to fit. Using an Arduino and a 16×2 LCD matrix he created a simple clock program with the ability to show different time zones. The way you select them is very clever.

END_OF_DOCUMENT_TOKEN_TO_BE_REPLACED 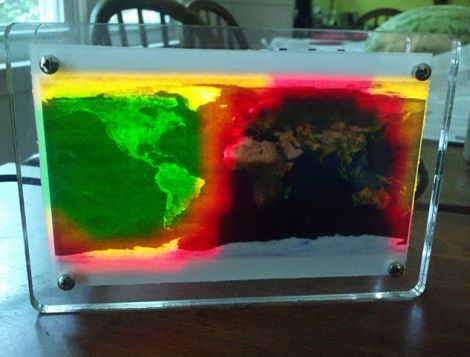 [Justin] always wanted a GeoChron clock, but since they run in the range of several thousand dollars apiece, he was pretty certain he would never have the chance to own one. Undaunted, he figured out a way to build a small version of the clock for himself, and he wrote in to share how it was done.

He first purchased a Wise Clock 3 from FlorinC, but he definitely wasn’t going to use the clock as it was originally intended. Rather than display the time in numbers, he pulled the Wise Clock apart and sandwiched a vellum printout of a world map in between the front face plates. A tweaked firmware image allows him to simulate day and night using the Wise Clock’s LED array. He also programmed the clock to take into account seasonal light patterns, as you can see in the video embedded below.

We think this is a great idea, and though we would probably use plain white LEDs if we built one, the RGB LEDs in the Wise Clock certainly provide a neat effect.