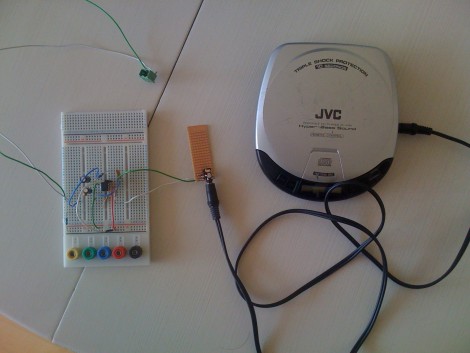 [Oliver Nash] was enlisted by his parents to fix their robotic lawn mower. They owned a Robomow which happily navigated their yard to keep the grass at a nice level. These robots rely on a perimeter wire with a special signal running through it to ensure they are inside of the mowing area. Confronted by a dead perimeter module, [Oliver] ordered a new unit and disassembled the old module to study the components. He also measured the signal generated by the replacement unit. In the end he was able to produce a replica of the signal using audio software, burn it to a CD, and playback the recording using the perimeter wire. It’s a bit of a zany idea but it worked. This portable Atari is the result of [Mario’s] toils. The core system is an Atari Flashback 2, an embedded system released in 2005 with several built-in games. The stock titles weren’t enough so [Mario] added a cartridge slot in order to play whichever games he wishes. The case was originally the packaging for an iPod touch so you know it’s sturdy. We also like the free-formed audio amplifier as seen in the work log. Does anyone know if the Flashback 2 has a pause feature?

After a gruesome accident involving a harvester, [Oscar] lost his legs. [Noel Fitzpatrick] a mad scientist veterinary surgeon came to the rescue. [Oscar] now has leg implants prosthetic feet. It is pretty amazing that a cat would even function in this manner. Have you ever seen one try to walk with tape on its feet? We have to wonder why that cat doesn’t have some more awesome looking legs though. We think that cat needs to team up with [Aimee Mullens], the olympic athlete with no legs, to get a better looking pair.

[Taichi Inoue] is back again, this time with a multitouch system that uses water as the touch surface.  The setup consists of a tank of water placed atop an LCD, a lamp, and a web cam. The web cam pics up the light that is reflected when something breaks the surface of the water. It is, as far as the computer is concerned, no different than the blob recognition we see with many of the home made multitouch systems. Mixed with his Yukikaze, this guy might end up with the most relaxing computer system in the world.